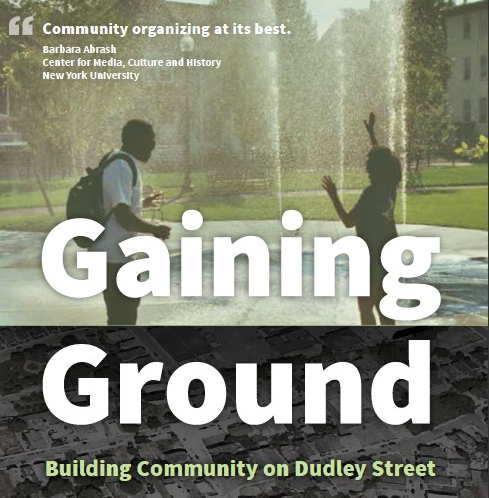 The Santa Cruz Public Libraries (SCPL) continues its monthly discussion series intended to help build resiliency within our community. The next event in the series, Gaining Ground, takes place at 6 p.m. on Thursday July 30th via Zoom. Register here to participate: https://santacruzpl.libcal.com/event/6856867.

In this event, all are invited to join Michael Watkins and Zach Friend for a discussion about the film Gaining Ground: Building Community on Dudley Street (2012; 59 min), available on Kanopy, the library’s online video streaming service. It is not necessary to watch the film beforehand but if you’d like to check it out, follow this link: https://santacruzpl.kanopy.com/video/gaining-ground-building-community-dudley-street.

In the midst of the economic meltdown, Gaining Ground explores the innovative, grassroots organizing efforts of the Dudley Street Neighborhood Initiative (DSNI) in Boston. DSNI was created 25 years ago when the community had been devastated by bank redlining, arson-for-profit and illegal dumping, and has become one of the preeminent models for community-based change. Over the course of two years, we watch a new generation of leaders working to prevent foreclosures and bring jobs and opportunities for young people to one of the city’s most diverse and economically challenged neighborhoods.

According to Library Director Susan Nemitz, “Building resilience in our community is one of the most important things we can do.” Considering the stressors of Covid-19, climate change, and racial and social inequality, “Our libraries must bring people together to have open discussions about how to protect our most vulnerable populations and the community as a whole,” Nemitz continued. The series is free and all are invited. Come with questions and ideas to help us build a more resilient community.

This event is brought to you by The Friends of Santa Cruz Public Libraries.

Michael Watkins is a founding member and currently serves as President of the California Association of African American Superintendents and Administrators, a group of educational leaders committed to addressing critical issues in education as they relate to African American students in CA. In 2006, Michael was the first African-American elected as Santa Cruz County Superintendent of Schools, a position he held for 12 years.