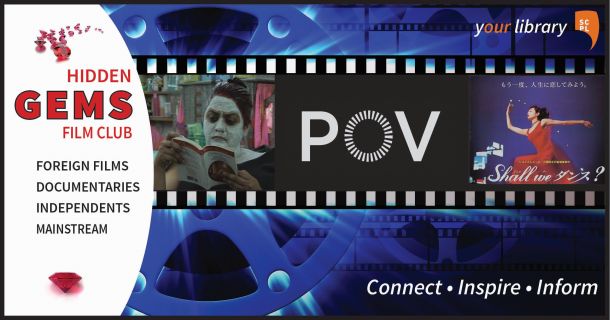 Bring your lunch and enjoy these independent films about two families navigating the chaos of father son conflict.

From the time of Cronus and Zeus, fathers and sons have fought. This September program of the Hidden Gems Film Club brings you independent films about two families navigating that chaos – one fictional, the other real.

The first film, “Verma Ji” directed by Shankey Srinivasan, poses the question: if you, as a parent, start an arranged marriage, what are your responsibilities for its success? This film was part of the 2013 Official Selection of Cannes’ Short Film Corner. The SCPL is pleased to share this film by the kind permission of Mr. Srinivasan who recently released, “The Last Smile,” a feature film which is currently circulating in film festivals, domestically and internationally. Language: English, and Hindi with English subtitles Running time: 24 minutes.

The second is the documentary “Crimebuster: A Son’s Search for His Father” which follows photojournalist Lou Dematteis as he searches for the story of his late father, the influential Italian American crime fighter and jurist Louis B. Dematteis, and examines their rocky personal relationship. Follow the threads of this personal story to learn about the Northern California reverberations of the Depression, ethnic stereotypes of Italian immigrants, corruption, organized crime, the civil rights movement, the Vietnam War and current global conflict. The SCPL is pleased to share this work, which broadcasted on PBS stations, by the kind permission of Louis B. DeMatteis, who recently co-produced an independent feature film, “The Other Barrio” which is currently enjoying its theatrical release, including venues such as The Roxie of San Francisco. Running time: 1 hour.

The films will be followed by a discussion. BYOL: You are welcome to BRING YOUR OWN LUNCH while enjoying the film!