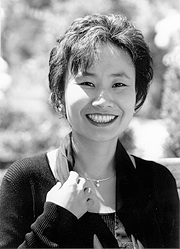 The lecture & demonstration will focus on the US Premiere of music based on the call of the California Towhee, a native bird, ubiquitous throughout the Western US., along with other natural resonators that the composer observed during evening and morning hours, over a period of several years.

Ms. Na composed a pair of complementary chamber works, Dark Study and Morning Study, that respectively reflect the nighttime sounds, followed by morning sounds, as emitted from a single urban/rural environment.
Ms. Na has twice been awarded the Korean National Composers Prize, and has received commissions from the prestigious Koussevitzky and Fromm Foundations. She has also been featured on many New Music Works programs over the past 16 years.

Audience questions are encouraged and welcome!

For details and ticket info: newmusicworks.org