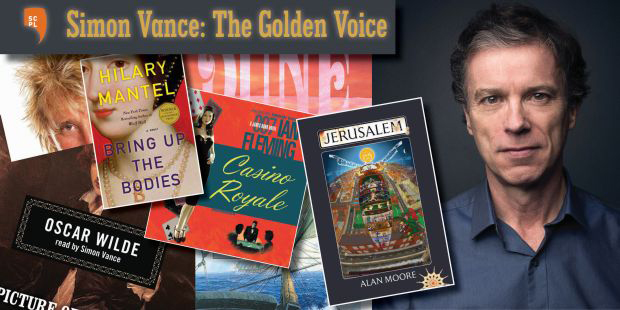 In Jerusalem, Alan Moore channels both the ecstatic visions of William Blake and the theoretical physics of Albert Einstein through the hardscrabble streets and alleys of his hometown of Northampton, UK. In the half a square mile of decay and demolition that was England’s Saxon capital, eternity is loitering between the firetrap housing projects.
Simon was named a “Golden Voice” by Audiofile Magazine, and Booklist Magazine named him its very first “Voice of Choice”. Some of his best-selling and most critically acclaimed performances include Bring Up the Bodies by Hilary Mantel, and Rod: The Autobiography by Rod Stewart. Other well-known titles include The King’s Speech by Mark Logue and Peter Conradi, Ian Fleming’s Casino Royale, Oscar Wilde’s The Picture of Dorian Gray, Patrick O’Brian’s Master and Commander series (all 21 titles), Frank Herbert’s original Dune series, and Stieg Larsson’s Milennium series of books (beginning with The Girl with the Dragon Tattoo). In addition to his extensive narration work, Simon also worked for many years as a BBC Radio presenter and newsreader in London and he currently splits his time between the SF Bay Area and Los Angeles where he recently appeared in Criminal Minds for CBS.