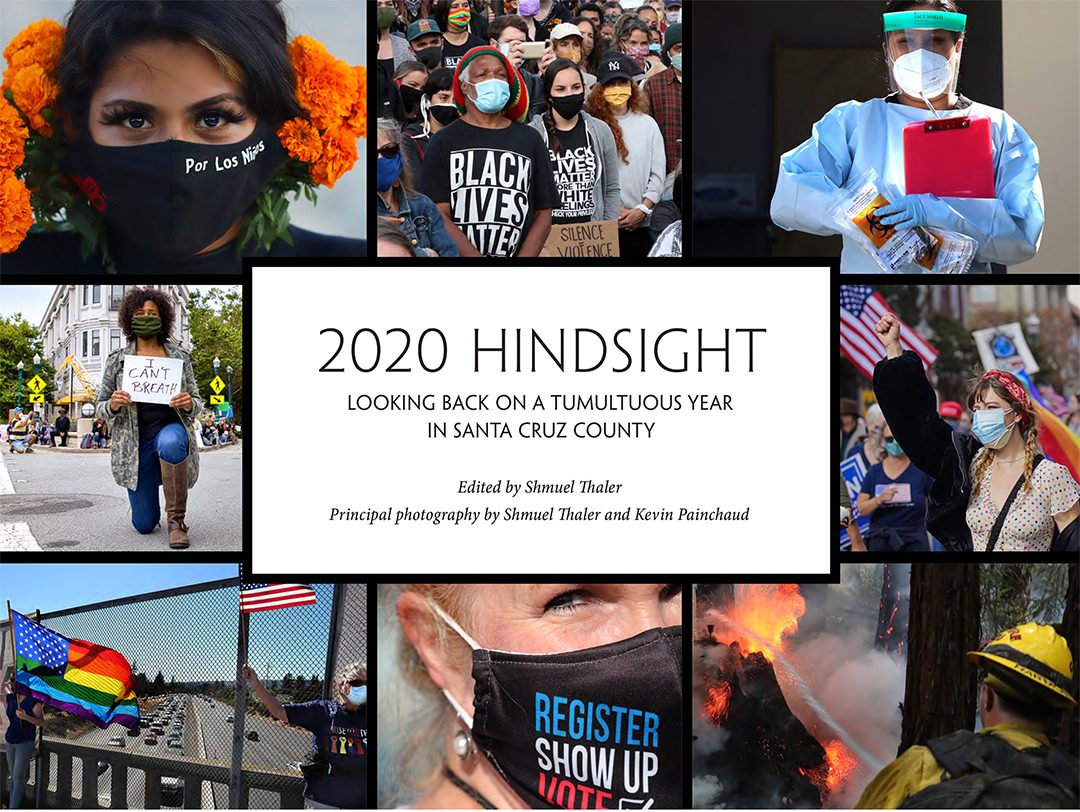 Released today, 2020 HINDSIGHT: Looking Back on a Tumultuous Year in Santa Cruz County, explores 2020 with nearly 100 full-color pages that retell through photography and words Santa Cruz County’s experience with the COVID-19 pandemic, social justice, wildfires, democracy and community.
The story of 2020 is told through the eyes of noted local photojournalists Shmuel Thaler and Kevin Painchaud, with analysis and essays by local writers and leaders including Wallace Baine, Gail Pellerin, Dr. Misty Navarro, Jacob Martinez, Rachel Anne Goodman, George Ow, Jr., and many more.
All proceeds from the book will go to the Community Foundation Santa Cruz County’s Fire Relief Fund. Through a partnership with the Santa Cruz County Office of Education, a free copy of the book also will be made available to every high school junior in Santa Cruz County, as well as free curriculum for all teachers of U.S. history.
The book is available for purchase at Bookshop Santa Cruz and www.hindsightsantacruz.com.
“Through images and words, we’ve created a thoughtful history of what was an often traumatic and at times inspiring year,” said Thaler. “The book is intended to help our community make sense of what we experienced and support work toward positive change.”
Meet-the-authors virtual event 3/9/21: Bookshop Santa Cruz will host Thaler, Baine and Painchaud for a panel discussion about the book.
Visit www.bookshopsantacruz.com for details.
About the Editors
Shmuel Thaler has been a staff photographer at the Santa Cruz Sentinel since 1987 and was the 2016 Santa Cruz County Artist of the Year. His photographs have appeared in every major newspaper in the United States. Shmuel spent much of 2020 documenting the CZU August Lightning Complex fires, Black Lives Matter actions, the election and the pandemic for the Sentinel. His photograph of Santa Cruz Police Chief Andy Mills and Mayor Justin Cummings went viral and was seen by millions.
Wallace Baine is a veteran writer, editor, and columnist who has covered arts and culture in Santa Cruz County for the Santa Cruz Sentinel and Good Times, and is the co-founder and host of the Gail Rich Awards. He now works as City Life Correspondent for Lookout Santa Cruz.
Kevin Painchaud is a professional photographer who has worked for various publications for the last 30 years. His photographs have been seen on news sites nationwide, including ABC News, CBS News, CNN and MSNBC. Kevin is currently staff photographer for Lookout Santa Cruz, shoots for Growing Up In Santa Cruz and previously shot for the Santa Cruz Sentinel. Kevin is also an Emmy nominated director/producer.