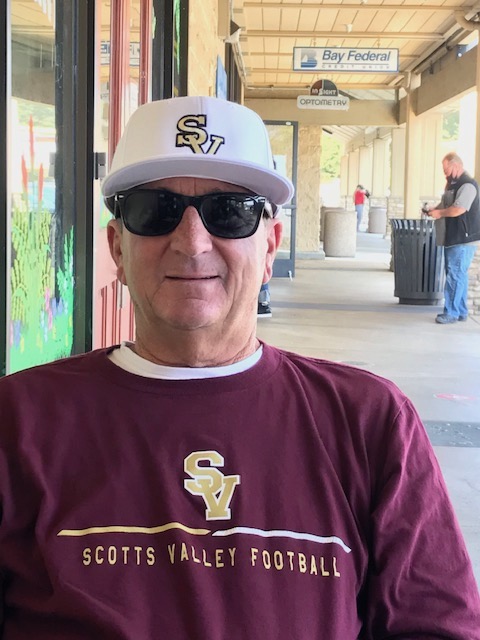 Retirement was so nice the first time, SVHS Falcons coach Louie Walters is going to try it again and see if he can make it last this time.

When he first retired in 2018, Walters was finishing up his 19th season with a cumulative 114-84-4 won-loss record. At that time, he said he was weary and wanted spend a period off the gridiron.

“I was done, I was ready for a break,” says Walters, who also serves as the school’s athletic director. “Football had become a year-round thing.”

It isn’t as if Walters wasn’t enjoying is long-awaited retirement. Quite the opposite is true. Barbequing, reading, golf, coaching girls’ sports, and watching TV filled his time in between trips to Kona on the Big Island of Hawaii to watch his daughter, Kenedi, participate in sports.

Wife Kristi still works as a hair stylist and his other daughter, Kaila, travels to softball tournaments with a local team.

But after the pandemic wreaked havoc on school sports from the spring of 2020 into the fall it seemed like there was no end in sight. But last November, school officials contacted Walters and told him there would be an abbreviated football season.

The next question was obvious: would Walters come back to the fold to coach a limited season?

“I wanted to be done, done, done,” says Walters, who has been at the high school for 21 years. “But I wasn’t going to leave them hanging.”

And what a final season it was

Once he decided to briefly come out of retirement, his first call was to the coaches he had worked with at the high school. All of them agreed to come back for the six-week season.

This year’s season differed a bit because of Covid-19 restrictions mandated by the state Department of Public Health. The Santa Cruz Athletic League allowed every school in the county to compete this year.

That’s not to mention that the season took off in the cold late winter instead of the fall’s Indian Summer. Granted the teams may not have been in tip-top shape after the long layoff, but that didn’t get in the way of the mighty Falcons.

Bottom line: Falcons 6-0 take SCCAL championship. Because of COVID, there will be no playoff system this year but who can argue with crowning the Falcons as Champs when they beat every team in the  league and did so convincingly.

“It’s a shame we could not have a playoff system this year because they were firing on all cylinders,” said Walters.

The retired future is now

Does Walters regret putting down his golf clubs to get back into the football fray? Not for a minute.

“I did it for the kids and love the game,” says Walters, who began his coaching career at San Lorenzo Valley High School. “This is a great group of young men.”

Though he won’t be on the sidelines next fall, Walters will help the school find another football coach. The school currently has several applications for the job, which receives a small stipend.

Walters says the ideal candidate would be a teacher as well as coach.

Walters looks forward to more trips to Kona and filling his days doing whatever he likes. “I live a simple life.”

No one would dispute that Walters deserves every bit of retirement he’s earned and right now he is retired once again. For now…