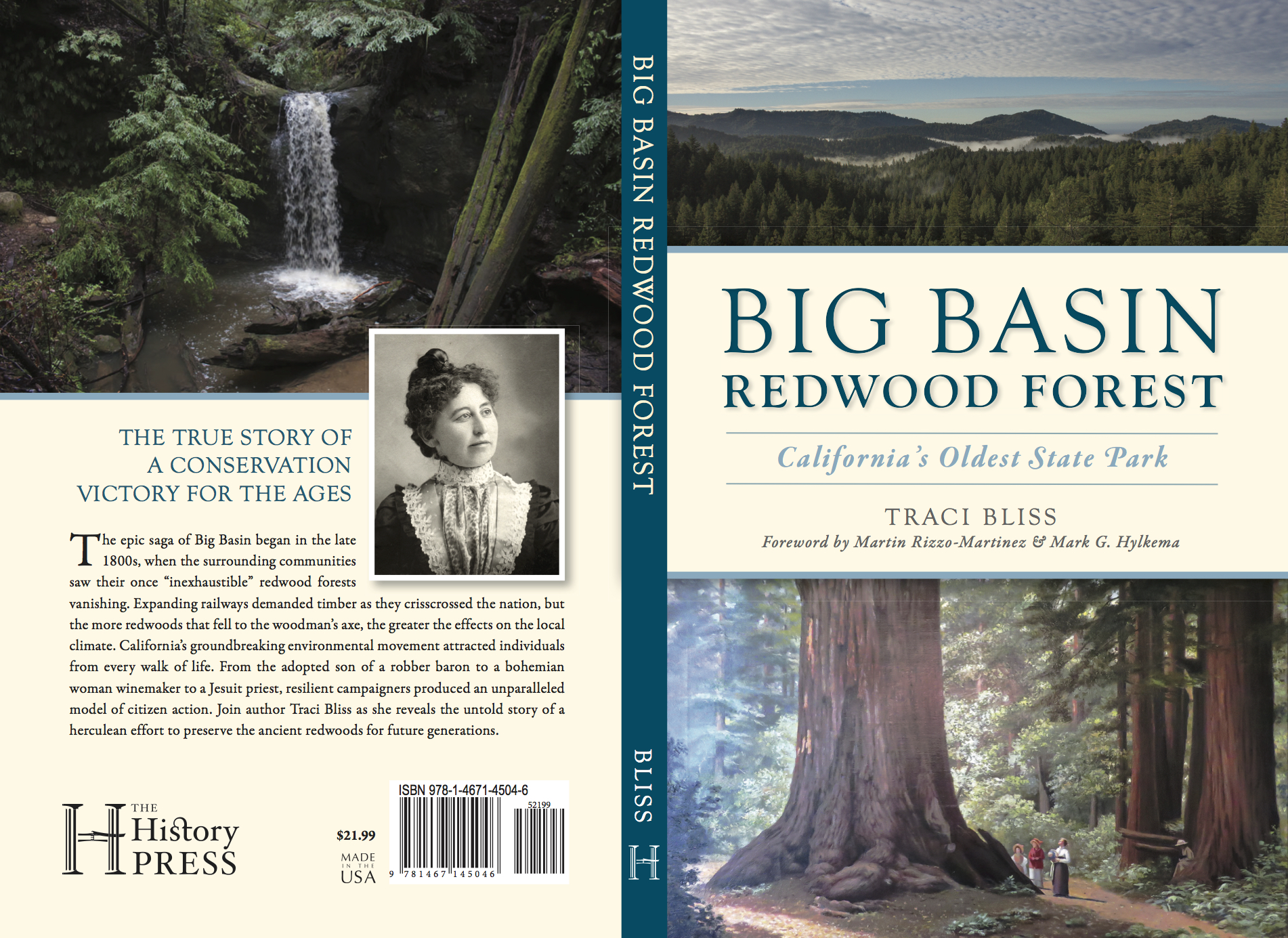 A portion of proceeds will benefit fire recovery efforts

Inspired by a story shared by her great-great aunt six decades ago during a family outing at Big Basin, local author Traci Bliss spent more than a decade meticulously researching the untold story of a herculean effort to preserve the ancient redwoods for future generations.

Big Basin Redwood Forest, California’s Oldest State Park shares the epic saga of Big Basin which began in the late 1800s, when the surrounding communities saw their once “inexhaustible” redwood forests vanishing. Expanding railways demanded timber as they crisscrossed the nation. But the more redwoods that fell to the woodman’s axe, the greater the effects on the local climate. California’s groundbreaking environmental movement attracted individuals from every walk of life. From the adopted son of a robber baron to a bohemian woman winemaker to a Jesuit priest, resilient campaigners produced an unparalleled model of citizen action.

“The decade-long study continued to reveal rich new layers about the men and women who never gave up, many of whom received little if any recognition for creating California’s first permanent state park,” Bliss wrote in the preface. “They came together to do what no one else in the country had done before, not only because they loved the redwood forests but also because of their innate humanity.”

Although rooted in the turn of the 20th century, the book features a foreword by California State Parks Historian Martin Rizzo-Martínez and Mark Hylkema, supervisor of the California State Parks Cultural Resources Program that explores the history of native people in the region, including the Cotoni who inhabited the Big Basin area for centuries. Friends Executive Director Bonny Hawley authored the introduction. The epilogue focuses on the CZU Lightning Complex Fire and provides a detailed account of the courage and dedication of several park employees during the fire and afterward. Author Bliss describes the first-person accounts as “…what has characterized Big Basin from the beginning: resilient commitment.”

“The work to reimagine and reestablish Big Basin will be a grassroots effort, just like the park’s founding,” said Chris Spohrer, Santa Cruz District Superintendent for California State Parks. “As we engage the community, we’re going to need the historical perspective and inspiration this new book so clearly provides.”

“The early preservationists endured one challenge after another over decades, with persistence and unselfish devotion,” said Hawley. “Their inspiring story could not be better timed.”

The book is available on the Friends website and the ParkStores at Santa Cruz Mission State Historic Park, Natural Bridges State Beach and Seacliff State Beach.

About the Author
Emerita Professor Traci Bliss began her career in public policy. She went on to become an award-winning education professor and state policy advisor to the National Board for Professional Teaching Standards. She holds BA, MA and PhD degrees from Stanford University and an MPA degree from the LBJ School, University of Texas–Austin. With this multidisciplinary lens, she captures the true story of Big Basin. Bliss’ ancestors, William Jeter and Jennie Bliss Jeter, were instrumental in saving Big Basin. Her recent books include the often-neglected role of women in community and environmental history. She is a member of the Santa Cruz Historic Preservation Commission and a state park docent.