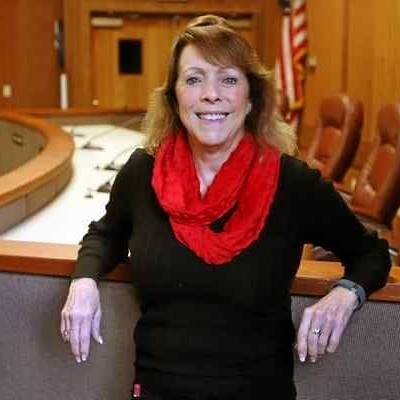 Recently, City Manager LaGoe and I attended a City Leaders Summit coordinated by the League of California Cities. The summit was an opportunity for cities to participate in a combined continuing education conference and Legislative Action Day in Sacramento.  Mayors, elected and city officials from all over California participated in the Summit.

We heard briefings and updates on legislative priorities in the areas of housing affordability and supply, infrastructure investment, funding and resources to address homelessness, and climate resiliency.  Following the briefings, we were able to participate in a press conference urging the state to dedicate a portion of their historic $100 Billion budget surplus toward city priorities.

At the press conference and during meetings with the Monterey Bay legislative delegations including Assemblymember Rivas and State Senator John Laird we shared issues. We highlighted a 3-pronged budget ask for California cities which includes $500 million for the creation of a housing and economic development partnership with the state, $180 million to implement the new organic waste recycling programs mandated by the state and nearly $1 billion for past due unfunded state reimbursements owed to local governments for the costs incurred to carry out state mandates dating back to 2004.

As many of you know, California Housing recently mandated that the City of Scotts Valley build 1220 homes with a majority being affordable housing. Cities urge the Governor and lawmakers to allocate funds to create a state-local partnership to help finance housing projects.

Cities were also mandated to participate in organic waste recycling programs under SB1383. Although the City supports organic waste recycling, the state provided no funding to put the solid waste management program in place. Requested funding would help local government implement the complex program while minimizing the financial burden the cost of implementing these regulations could have on taxpayers.

The state owes more than $933.5 million to cities, counties, and special districts for costs related to state mandates incurred after 2004. Of that amount, $466.6 million–not counting interest–is owed to cities. I was able to participate with other Monterey Bay officials in a meeting with Senator John Laird to advocate for funding to accomplish the various mandates California has issued. This is particularly important at this time with California cities struggling to recover and rebuild due to the pandemic.

One of the areas discussed is infrastructure which is suffering state-wide. The City of Scotts Valley has been rebuilding in several areas, including the poor condition of our streets.

During the May 4th City Council Public Hearing, Public Works Director Chris Lamm presented a report on several planned projects to improve local streets. The first report described a project on Bean Creek Road from Bean Creek Rd to Redwood Way. The pavement has deteriorated and will be repaired. The project also includes drainage repair and a much-needed barrier at a curve on Bean Creek Road to assist with protection from vehicles running off the road into adjacent residents of Montevalle. Funding for much of the project is provided from the Road Repair & Accountability Act known as SB-1. 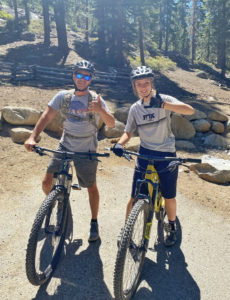 Photo of Scotts Valley High Student Mai Goericke and her father Jan Goericke who presented a check for $1628 for re-striping bike lanes near schools.

Due to a lack of funds and staffing, most city streets have not been re-striped for several years. There is concern about poor striping on several streets, particularly near our schools. This is listed as a priority for the upcoming year.

Scotts Valley High student Mia Goericke attended the May 4th City Council meeting to present a check in the amount of $1,628. Ms. Goericke completed a Senior Project which was a fundraiser to get the bike lanes painted by Scotts Valley High School, Vine Hill Elementary School and the Glenwood Preserve Trail network.

Ms. Goericke was involved in a traffic accident while riding her bicycle to Scotts Valley High School a couple years ago. Thankfully she recovered from her injuries and decided to use her experience to make a difference for others traveling to and from school. To raise funds, Ms. Goericke coordinated a raffle, offered skills classes, and hosted a bike ride. Local bike shops donated products for the raffle prizes. She worked with Ecology Action to collect the funds, and they presented the check for $1628. City Council members and staff commended Ms. Goericke for her great work to improve safety in the community.

Public Works Director Lamm listed several projects scheduled and funded by Measure D over the next 5 years. These include improvements on Glenwood Drive from Scotts Valley Drive to K Street above the High School. Ms. Goericke’s funds will contribute to the restriping. Improvements are also planned for Scotts Valley Drive, Mt. Hermon Road as well as a major improvement of the Granite Creek Road Overpass.

Hopefully state legislatures heard the concerns city officials throughout California raised during the City Leaders Summit and will give strong consideration to the budget requests we made.