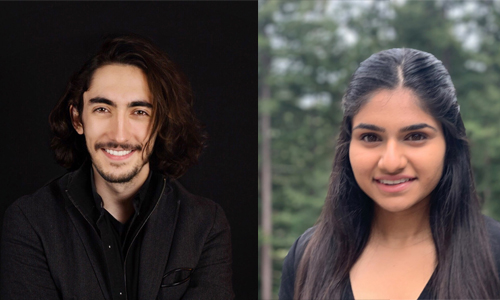 Two of Scotts Valley’s brightest young adults are speaking at a worldwide tech conference to spread the word on what the world is going to become.

Seamus Ruiz-Earle, 22, and Anika Mystry, 18, plan to enlighten attendees at the DevOps World Conference on Sept. 28-30. The virtual meeting will bring software experts from all over the world to learn about the future of software delivery.

Let’s get to know these special people…

Seamus was raised in the Skypark area of Scotts Valley and attended local schools, still finding the time to become an Eagle Scout. He began studying at Bellarmine College Preparatory in ninth grade. While attending Bellarmine, Seamus worked as a teacher’s aide in biology and AP world history and was named a prestigious National AP scholar.

His life changed when, at 17, an investment banker spoke about his career at Bellarmine. Seamus had been interested in the financial world since he was 14. But after listening to the banker speak, it solidified his thoughts on becoming a whiz in the financial community.

Being the can-do man that he is, Seamus got on the phone immediately and called 25 investment banking firms looking for a position. Everyone said he was too young. Not at all discouraged, the 26th call was to Prager & Co. LLC, a small boutique investment bank.

Though they did say he was a bit too young to do financial work, the interviewer asked if he knew anything about Salesforce, a cloud-based software company that provides customer relationship management (CRM) service.

“I was 17. I never heard of the thing,” remembers Seamus. “But that was sort of the start of my journey. Over the next six months, I trained myself on Salesforce. The rest is history.”

It quickly became apparent that this powerful application was not as intuitive as it could be. Seamus already knew how to code for computers, but even he faced a steep learning curve.

After his six-month Salesforce training, Seamus went off to study at Boston College. In doing so, he became the first student ever to take a double major (history and economics) in just three years.

“I’ve never been one to waste time,” he says, not mentioning that he made the Dean’s List and was a Department Honors graduate while at college.

As if cramming a double major into three years wasn’t enough, Seamus worked 20 hours a week administering Salesforce for the investment boutique, as well as putting 20 hours a week doing IT support for several campus organizations.

Originally, upon graduation, he envisioned connecting college students with companies who could use their skills. So founded Carabiner Group, but then the customer focus changed.

“We can transform a business and the actual business leaders themselves who may or may not be technical,” he says. “But they know they need to make a change to better their business.”

The company has 25 customers worldwide, mainly start-ups and financial concerns, that all need Salesforce support.

“Salesforce is used everywhere, but most end-users don’t like it very much,” he says, adding that he currently employs 10 full-time and 10 part-time workers. “It’s a specialized skill set.”

Instead of sending technical support when there is a Salesforce problem with a customer, Carabiner embeds teams with customers for the length of their contract.

This year Carabiner will earn $2.5 million but anticipates growth to reach $8 million next year.

At the upcoming conference, Seamus plans to talk about one of his favorite subjects, ageism in business.

“People who are young and also people who are more advanced in their career both have that same challenge,” he says. There is a public perception that you need to fit a mold to be successful. My advice is to find something where the need is so great that they can’t ignore you.”

It almost doesn’t seem possible that Anika has reached so many accomplishments at 18, but one gets the impression that she’s just getting started.

When Anika was 14 and a sophomore at Scotts Valley High School, her best girlfriend moved away to attend a special school that teaches students with autism.

“It wasn’t fair, I was confused,” she says. “Why wasn’t anyone helping people get what they need?”

And thus began a brainstorm that uses virtual reality and special software to help those on the spectrum learn about the world from anywhere.

Her friends at school laughed in her face when she suggested they all create a solution using technology. They saw only the negatives, such as a kid trying to move an idea through the competitive adult world.

Undaunted, Anika furiously sent emails to local universities asking them if she could work in their lab and help people with disabilities. After three weeks, UCSC replied that their psychology department was looking for interns in the fall.

She had solidified her idea by the time she first stepped on campus: create a game to teach students with autism social-emotional skills.

Sound simple? Not so fast. Anika, after reading countless academic journals, began to understand that not all people with autism are alike. Also, most school districts are strapped financially, so developmental needs are often non-existent.

She began advocating in her community. As president of the school’s service-oriented club Interact, Anika partnered with the Rotary Club of Scotts Valley, speaking to the group about the necessity of early intervention.

After working with multiple organizations, Anika joined Girls with Impact, a group of 600 girls who use business to create change. Quite a learning experience.

“At 14 I thought I could fix the unfairness my friend with autism experienced,” she says. “But that’s not enough. We need to take action.”

She took concrete action and developed DevMind VR, a virtual reality game that teaches people with developmental disabilities how to react appropriately in a social setting.

“I don’t want to be a person who just draws prototypes on my bedroom wall,” she says. “I want to innovate and advocate.”

Anika is continuing her journey next week when she begins studying computer science and cognitive science at Johns Hopkins University.

Looking to attend the conference online? Register at: https://tinyurl.com/3ph4a7y6