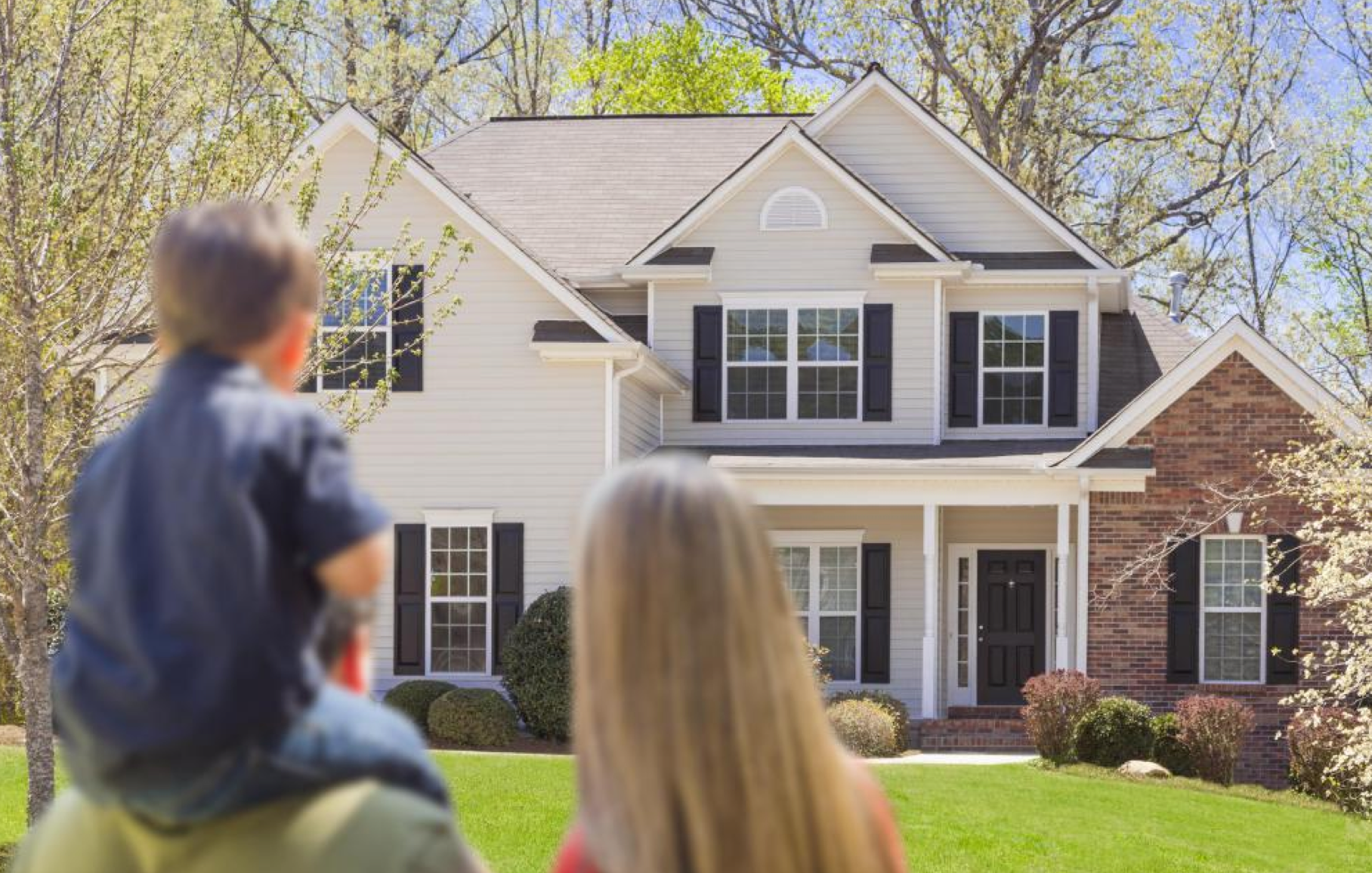 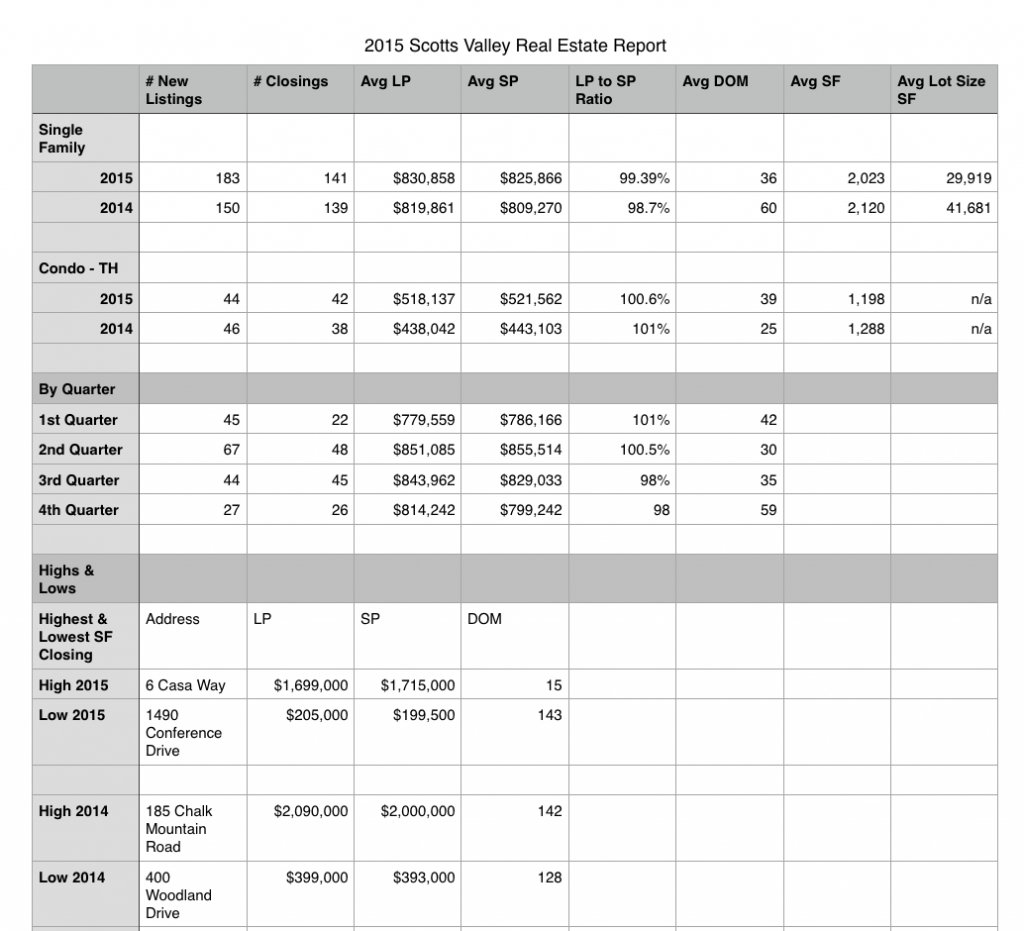 The Year That Was…

The Scotts Valley real estate market stats have come out for 2015 and they showed a hotter market than 2014 as days on market plunged from 60 days in 2014 down to 36 days, a drop of almost half of what it took to sell a single-family home (SF) once it hit the market. That is a pretty dramatic drop and said a lot about the market that had home buyers lining up to see homes and make offers as they tried to get their foot in the door of home-ownership in Scotts Valley.

The third quarter stayed strong, with 45 closings averaging 35 days on the market, but list price to sales price ratio dropped to 98%. The coolest time of the year was also the coolest market of the year as homes stayed on the market longer, averaging 59 days, but prices held their own as the average sale closed at 98% of asking price.

The above trends are nothing new as spring comes around, more homes go on the market and as winter and the holidays come, the market tends to cool down.

I see more of the same in the single-family home as well as the condo-townhouse market and I get the feeling we may even see a hotter first half of the year than we saw last year as more buyers come from over the hill and rates probably start to tick up a little causing buyers to try and get in on the historic low rates before they go up. Many experts are predicting rates to go up to around 4.5%, although I have to say that I have been hearing this story for some time now. Although this time with the Feds raising rates, it actually could happen, I do not see it being too much of a jump in rates as there still remains much uncertainty in the world financial markets. But let’s put it in perspective, 4.5% for a 30 year fixed mortgage rate is an amazing interest rate compared to the history of mortgages.

But, There Are No Homes For Sale!

A concern among home buyers and potential home sellers that want to sell and move up or move down seems to also be the lack of inventory as we are currently having one of the lowest housing inventory in many years. At the time of this writing, through January 19th there have been 6 homes come on the market so far. At the same time last year (though January 19th 2015) we had 9 homes come on the market. These figures mean that this year we have .32 homes come up per day versus .47 last year, which is about a 32% difference so far. But don’t put too much weight on this as I have been talking to many potential home sellers as well as other local agents that have homes and sellers that are getting ready to come on the market within the next 4 to 8 weeks.

If you are a home seller thinking of upsizing or downsizing, consider listing your home subject to finding another home. Meaning, if you cannot find another home, especially with the low inventory, you do not have to sell and end up without a home. I have a lot of people tell me that they have been told that this can’t be done. But I say, of course it can! I do it all the time. The last thing you want to do is sell your home and not have anywhere to go.

I see another strong market in 2016. I just see too many signs pointing to more people wanting to come here from Silicon Valley and other areas as Scotts Valley is no longer a secret. I made a comment to a Santa Cruz Sentinel reporter in an interview that I did that I saw our town being a mini Los Altos one day and I am sticking to my prediction. This location and city offers so much in the way of great schools, local amenities, low crime rate and the proximity to Silicon Valley. It was just a matter of time before it was discovered.

HOME SELLER TIP: If you are a home seller, let me be clear on the importance of pricing your home right to begin with.

Case in point: There was a property for sale here in town that I saw that I thought was over-priced and did not show well because it needed repairs and sprucing up. It was on the market for quite some time, almost 100 days. I listed a home that was in the same area and was smaller, in an inferior location, but got it ready with a good cleaning, carpet, a strong marketing plan and a good price and it sold in about a week over asking price and the competition eventually sold for quite a bit less than our listing.

The thing is that although buyers are willing to pay top dollar for a home, very few are willing and able to pay more than what the home is worth. Get it show-ready and price it right! Work with a local agent that knows the market and knows first-hand how to price your home right.

HOME BUYER TIP: If you are a buyer, be patient, be diligent and be on the lookout. Work with a local agent that knows about homes that talks to other agents and to potential home sellers so that you get to find out about homes before they even come on the market. It does not mean you will get it for a better price, but it does mean you will have more time to be prepared so when the home is ready you are ready to act.

Know your market that you are targeting, know the values and trends, and hold on to your hat as this is going to be quite a ride that will be worth it for years to come.

Happy selling and happy buying in 2016!