Did the City of Scotts Valley Pull a Rabbit out of their Hat in Voting to Demolish Polo Ranch Barn?

Did the City of Scotts Valley Pull a Rabbit out of their Hat in Voting to Demolish Polo Ranch Barn? 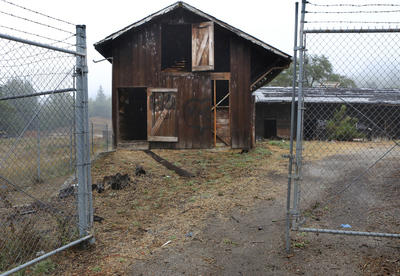 January 15, 2014 – They say that you can’t have your cake and eat it too. But maybe you can as tonight’s Scotts Valley City Council meeting took place to decide on the fate of the Polo Ranch Barn and it could end up to be a win-win for all. Although they voted unanimously to accept the $1,000,000 and allow Lennar Homes to demolish the structure rather then move it as it originally agreed to do so several years ago, the final results might not be known for at least another 30 days. It could be longer as the builder will probably not start breaking ground on their new home development for several months which gives them more time to look at other options rather then demolishing the structure. Confused? Read on…

In a well-rounded and represented discussion between opponents and proponents represented by Scotts Valley residents, the City Council and an appearance by representatives from Lennar Homes, each side presented and posed very valid points.

But in the end, the vote was to allow demolishing of the structure, with one minor and important twist. It appears that Pasatiempo Golf Club may be interested in moving and preserving the structure somewhere on there property. Why would Pasatiempo be interested in the barn? The builder of the Polo Ranch Barn was Marion Hollins, who also played a part in building Pasatiempo Golf Club as well as Cypress Golf Club in Monterey and it hopes to preserve it as a historical monument and important artifact to their golf course.

There is no argument that the Polo Ranch Barn does hold some historic significance, but at what cost is the bigger question as the cost to move and restore the structure could prove to be in the hundreds of thousands of dollars. This does not even include the $1,000,000 that the city of Scotts Valley would have lost out on had they instead decided on having the builder move the barn. It could have been a cost of $1,500,000 or more when all was said and done.

Instead, the city gets their money, the builder does not have to move the structure and Pasatiempo gets a historical structure if they are able to strike a deal to move it. The worst possible case scenario is the structure gets demolished.

Keeping the structure in Scotts Valley was not an option in many people’s opinion. It would have been similar to writing a check for $1,000,000 and then having to put in several hundreds of thousands of dollars to preserve it and make it safe and useable, a cost that the already financially strapped city could not afford.

City Councilmen Dean Bestuchi and Randy Johnson presented very clear and solid cases as to how important the money was for the city. As Bestuchi put it, “It’s a matter of want versus need”, and although most would probably want to be able to keep the structure, the fact is that the city has many other needs that should take precedence over the structure.

I believe however that we may have left $500,000-700,000 on the table if we had pushed hard enough as there was discussion that the builder may have budgeted up to $2,500,000 to deal with the structure. But then again, maybe not, perhaps it is just the negotiator in me coming out.

If things work out as everyone hopes and Pasatiempo is able to take the structure off the hands of the builder, and it gets preserved, it will no doubt be the most perfect ending for everyone.  If it does happen as everyone hopes it will, the Scotts Valley City Council will have pulled a rabbit out of their hat. However, if for some reason Pasatiempo cannot save the structure, I still believe that the city council made the right choice regardless.