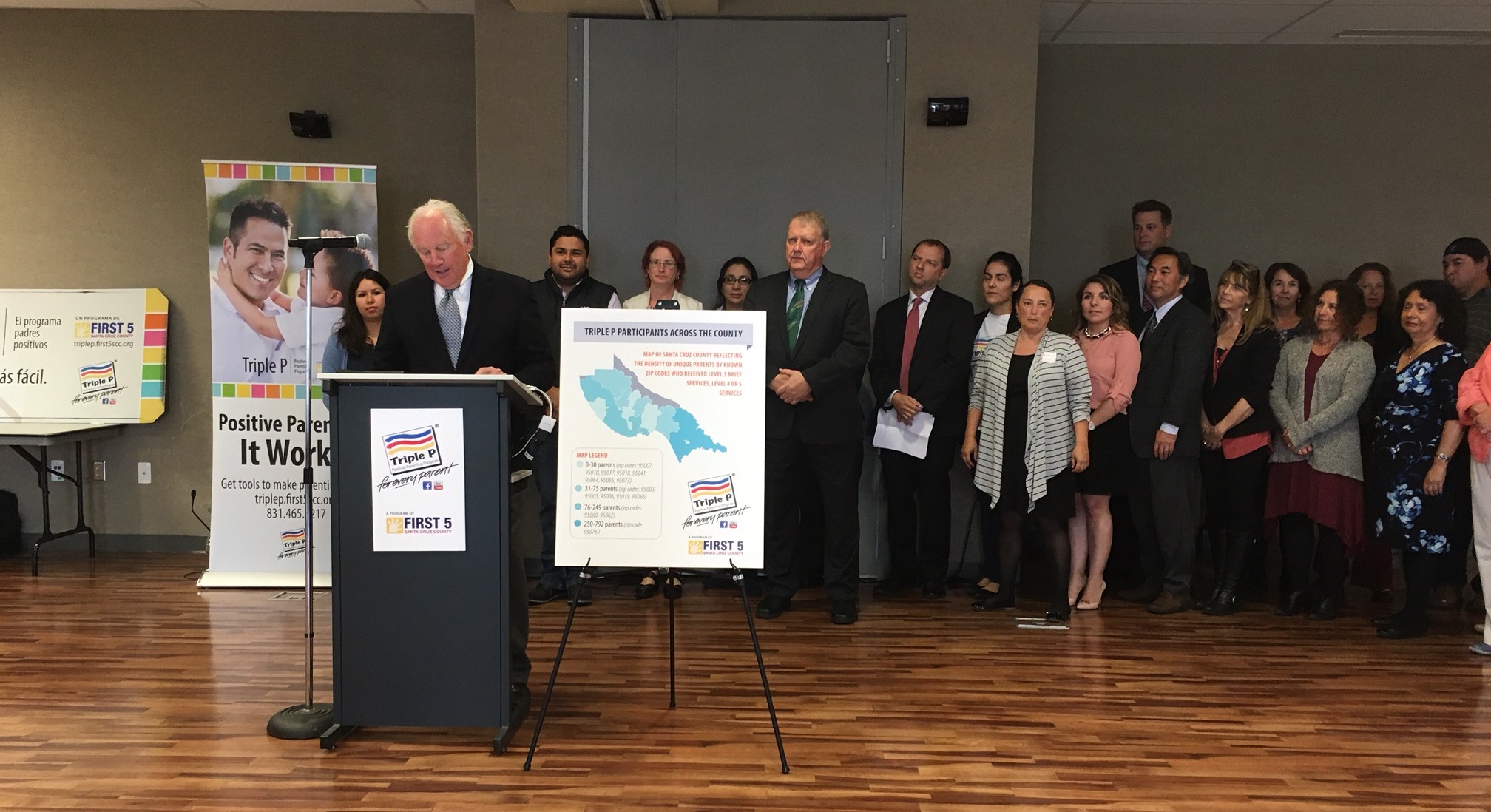 Key findings of the report:

“Triple P is an outstanding model for helping parents,” said Dr. Salem Magarian, Pediatric Director for Santa Cruz Community Health Centers and a Commissioner for First 5 Santa Cruz County. “It’s an evidence-based program that’s been around for many years. It’s not just an industry standard, it’s a life standard to provide this kind of support, and it’s for all families.”

“I’ve always wanted to attend some sort of parenting class to learn tips/strategies and be able to be a better mom,” said Angelica Ibarra, parent of three boys ages 13, 11 and 8. “Recently, our school contacted me to ask if I wanted to be part of Triple P parenting classes. I immediately said yes. It was the best decision I’ve made. I’ve discovered that a simple strategy, such as quality time, can make a big difference in the relationship with my sons. Triple P has impacted me and my family in the best possible way.”

Originally developed as a home visiting program in Australia, Triple P is now used in 26 countries and has been endorsed by the World Health Organization, the Centers for Disease Control and Prevention, and the United Nations as an effective, evidence-based parenting intervention. In the United States, California is one of 37 states where Triple P is available, and Santa Cruz County was one of the first counties in California to adopt Triple P. Of the 26 counties where Triple P is present, Santa Cruz County is one of the few that is implementing the full suite of programs with the goal of achieving a population-level impact.

“We have no doubt that the widespread, local availability of Triple P has been a vital contributor in the effort to help more children grow up in safe, stable, and nurturing families,” said David Brody, Executive Director of First 5 Santa Cruz County. “Five-year data shows that Triple P has helped turn the curve on children’s health and well-being at a population level.”

First 5 Santa Cruz County and its partners introduced the evidence-based Triple P system after child abuse rates rose in the years leading up to 2008. The 5-year report suggests that both English and Spanish speaking families, as well as both men and women, found the Triple P strategies relevant and helpful, indicating the cultural responsiveness of the Triple P model and the common language of positive parenting. Evaluation data also showed that Triple P’s parenting strategies became tools that gained traction and usefulness with parents as they continued to learn, practice and self-evaluate their progress.

“Once I started implementing some of the Triple P strategies, I started seeing the change in my teenager,” said Elisa Collazo, parent of three girls, ages 19, 16 and 7. “It has been a slow process, but my communication with my daughter has improved as well as my relationship with her. I now have a set of rules that my daughter is actually following. I pay attention to my tone of voice when I talk to her. I try to keep calm and be flexible with her. Plus, my daughter noticed that I was attending parenting classes and recognized my efforts of trying to be a better mom and that makes me really happy.”

First 5 Santa Cruz County invests in health, early learning and family support to promote the well-being of children. A growing body of scientific evidence points to the economic and societal impacts of wise investments in the early years. First 5 Santa Cruz County is dedicated to giving children the opportunities they need to reach their full potential. First 5 Santa Cruz County was established by the Santa Cruz County Board of Supervisors in December 1998 by urgency ordinance to ensure that family-friendly services and education are available, so that each child reaches the fifth year of life healthy, ready and able to learn, and emotionally well developed. We are committed to involving community members, as well as professionals working with young children and their families. For more, visit www.first5scc.org.