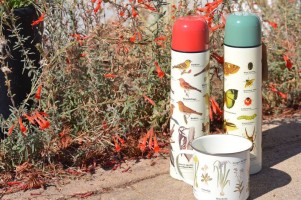 The weekend-long event offers 20-30 percent discounts on great park-themed merchandise, including apparel, jewelry, books, toys and iconic Michael Schwab art. A 20% discount storewide will be offered during the sale, with Friends’ members receiving 30% off purchases. Become a member at the Holiday Sale for just $25 and receive the larger discount.

Beginning at a First Friday event on Dec. 4 from 4-8 p.m., the evening will feature Ooh! Look! Photography, a husband and wife team from Santa Cruz that focuses on wildlife photography in the Monterey Bay area; a Spanish trio playing live music; and Mutari Hot Chocolate paired with pan dulce, a Mexican sweet bread. Kids will be able to create papél picado, a decorative craft made out of paper cut into elaborate designs that is considered Mexican folk art.

“The public’s support of the Mission Adobe, a hidden gem in downtown Santa Cruz, has been wonderful,” said Friends of Santa Cruz State Parks Executive Director Bonny Hawley. “Our annual holiday sale allows us to showcase many unique nature- and history-inspired gifts, all at great prices. We encourage the community to shop local knowing that all of the proceeds support our work at local state parks and beaches.”

The Santa Cruz Mission State Historic Park, “Your State Park Downtown,” is home to the oldest building in Santa Cruz County. Built between 1822 and 1824 by local Ohlonean and Yokuts Indians, the park’s signature adobe is the only remaining structure from Mission Santa Cruz, founded in 1791. One of just four adobe buildings left in Santa Cruz County — and sometimes confused with the nearby replica mission chapel — it is the only building of its kind preserved as a museum in the State of California. The adobe served as housing for Neophyte families who lived and worked at the Mission, which operated until 1834 when it was secularized. After decades of private ownership, the adobe was sold to the State of California, extensively restored and finally opened in 1991 to the public as the Santa Cruz Mission SHP.

Friends of Santa Cruz State Parks saved Santa Cruz Mission SHP from closure in 2012. Friends funds interpretation services and a portion of park operations, and also runs the Mission ParkStore. In addition, Friends has implemented key improvements at the park, including a remodel of the patio, the opening of new interpretive exhibits, renovated outdoor cooking facilities and new hours of operation to serve local school children. Friends also established the Summer Series, a popular series of cultural events at the Mission that culminates with the Mole & Mariachi Festival each September. The park is supported by the Mission Committee, members of which include representatives of Friends, State Parks and dedicated community volunteers.