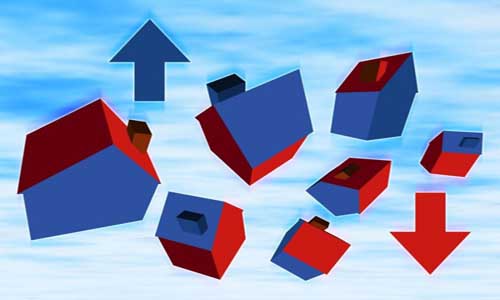 Up and down, up and down. That is how the housing market goes according to the time of the year, and according to what interest rates are doing. As we go into the last quarter of the year, it appears that new inventory could be on the decline as 8 new listings have come on the market since October 1st. As of today, October 16th, that represents .50 listings per day, on pace for just over 15 listings coming on the market this month. It also appears that home sellers are not getting what they are asking as much as they did just a few months ago.

Single Family Homes
In regards to closings so far for the month of October, there are 12 closed sales with an average sales price of $946,988. The average list price was $976,599 which means that homes sold and closed this month so far at just under 97% of the asking price. This is a drop from just under 99% of list price to sales price ratio in August and close to the same as September figures when single family homes sold at just over 97% of asking price so we are seeing a two month trend so far of about 97%.

Remember, homes that are closing this month and last month are usually homes that sold 30-45 days prior, so homes that closed in August at 99% of asking price were homes selling pretty much at the peak of the market from late May through July. In fact, May closings were at 99.2% of list price. Closed sales that you are seeing now and in September were sales that went into contract in August and September, when kids go back to school and other things like the end of summer slows things down in the housing market. However, an average of 97% of list price to sales price ratio is not a bad thing at all, it is more in line with what we see most months in a healthy market.

So basically, as we head into the holiday season, expect to see less listings and less activity. But this goes both ways. We should see less listings and we should see less buyers so those homes on the market during the holiday season are serious sellers and could be a good opportunity for some home buyers. Again, if you are a seller who will also buy again, it will work both ways for you.

Condo-Townhouses
The average sales price for condo-townhouse closings so far in October is $458,000 with an average list price of $454,500. This means that condo-townhouses are selling at about just under 101% of list price, which was almost identical to September figures for the same type of property. In case you are wondering, August figures were at 102.68% so there was also a similar drop in list price to sales price ratios in condo-townhouses as there was in single family homes.

Interest Rates – My Goodness!
As crazy as it may seem, rates have come down again and are now sitting at 4% and even at 3.75-3.875% for a 30 year fixed rate loan. That is outstanding and leaves me scratching my head because rates have stayed so low for so long. Having been in the business for over 28 years, these past few years will be something I KNOW I will be telling my grandchildren about. That is of course if they will want to talk real estate with me. 🙂

If you have an interest rate well over 4.25% and if the numbers make sense, consider refinancing to a 15 year fixed rate mortgage as those rates are right around 3%. No kidding. So if you have 15-20 years left on your mortgage, do the math and see if you can afford it because of you can, you will save tens of thousands in interest by doing so.

The Final Verdict
With awesome rates and still a healthy amount of homes on the market, check out the possibility of owning a home if you can afford it. If you have thought about moving up or moving down, the low rates will soften the blow of a higher payment if you are moving up, and sweeten the pot of a much lower payment for those who are trading down.