As news comes across our town of recent burglaries, I decided it was time to buckle-up and invest in a complete home security system. The town of Scotts Valley has the lowest crime rate in our county, we have some of the best and fastest to-the-scene police, but like any town, there will be an occasional burglary or crime committed. Thankfully, it happens a lot less here than we think, even though social media may say otherwise as every bit of news, bad or good, is posted and re-posted. But it still happens and you have to take precautions and take steps in hopes that you are not the next victim, and alarm systems are a major step in deterring home burglaries. Stats show that 9 out of 10 burglars will walk away from a home if they know that an active alarm system is set up.

So between a home alarm system and security cameras, I figured that you could not have one without the other so my quest to find the right complete system for me was on.

I first set my sites on a good alarm system and I researched and talked to numerous alarm system professionals as well as did a lot of research on the internet, watched a lot of videos and the following were qualities which I deemed important features to have in a system:

Having read all of the reviews and researching alarm after alarm and talking and meeting with alarm installers and companies, I settled on one of the highest rated systems, in fact it was the highest rated in just about every website I went to and had outstanding reviews. Yes, every once in a while I read a negative review but in the age of the Internet, its safe to say that just about every business has had an unhappy or unsatisfied customer and with the way things are today, people love to put in their gripes.

The alarm system that I went with is FrontPoint Security for various reasons, they were all of the above and more. In addition to highly rated customer service and products, as well as affordable to the tune of less than $300 upfront and $42.95 per month for my service, they also had a few other features that I was not aware of like “crash and smash” where even if a burglar were to break in and smash the keypad system, which many do and make the system unable to send alerts to the call center, the system I chose will send the alert that it has been set off before they can even get to the keypad and the call center will have to verify that you set it off by calling you and if you do not answer, nor does the backup number that you provide, they immediately alert the police that there may be a burglary in place and knowing the Scotts Valley Police Department, they will be at my house before the call center gets off the phone with the PD.

So it is pretty much fool proof for the most part when someone breaks in as there is nothing to disconnect or destroy that would stop it from sending an alert to the call center. In other words, even if they get to my keypad and smash it, it does not matter because the alert has already been sent and only I have the ability to call off the alert.

And speaking of wireless, the system also runs on a cellular network so no phone line is needed which is awesome in the event that burglars cut your phone line, it does not matter.

The setup of the system was about as easy as opening up a box, as their system is a self-install system, and knowing how to peel stickers and put two small blocks together. What I got was several door sensors including a garage door sensor which goes off the moment someone rolls up or activates my garage door. I also got a glass breakage sensor which goes off if someone breaks a window in my home, or even drops a glass on the floor.

Putting up the sensors is EASY, the key is knowing that you need to match the arrows together or else you will not get a connection. I was surprised that this information was not in the manual and this was probably my biggest complaint as I set them all up not matching the arrows and I had to take each one of them off and reinstall them. Because the adhesive is very strong, it ended up removing paint from one of my doors and I was not to pleased with that. But other then that, it was as easy as any peel and stick application and I was able to put up all the sensors in all exterior outlets within about 20 minutes. The same thing with the glass breakage sensor, same peel and stick feature. 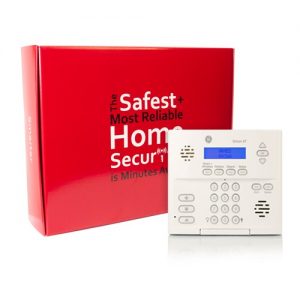 The keypad control center was also just as easy. It was just a matter of plugging it in along with the back-up battery that comes with it and calling Frontpoint to activate my system. There were also a few other instructions on making sure your sensors were being read accurately by the keypad control center, but it is pretty minimal stuff that can be figured out by reading the instructions. But DO read the instructions, that is why they are there.

Once I was setup with Frontpoint, the rest was even easier and I was now on to setting up my profile online with them, which is a link they give you via email when it is setup and then a download of the app on my iPhone from the app center.

There’s an App For That! 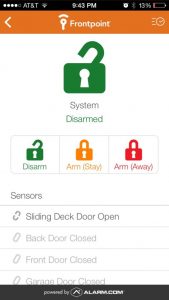 My biggest frustration in getting the app was not knowing that this is an app by Alarm.com and when I was in the app center, I kept looking for the “Frontpoint” app. After a little research and a phone call to Frontpoint, I was told where to go and the rest was easy. Remember to register your information online first so that you can login to the app and start using it on your iPhone or Android.

Using the app was easy, just like using any app. What I really liked about the app was the ability to know when a door was opened as I could see at any time what was open and even setup a text and email alert the moment it happens, and I can see when it is closed via the app. It is that cool. And when I know that a door is opened, I immediately can see who opened it on my security camera system which is also accessible on my iPhone, and which I will review at a later date.

One of the biggest learning curves you will have will be remembering that you are now in a home with an alarm system and quite a few times I accidentally activated the alarm when letting the dog out or in. But more and more each day I am getting used to remembering and false alarms are far and few in between.

The initial system was about $700 for all needed hardware, sensors and keypad control center. However, I was able to get a discount during a promotion and got the entire system for less than $300. In talking to other companies and even having them come to my house for an estimate, I was looking at close to $1,500 for setup fees which in my opinion was way out of touch with what is now available.

But the thing is, it was not the cost that what was important to me. I am no Donald Trump, I don’t have money to burn, but I also was not going to pick a system based on price instead of reliability and ease of use. This system gave me everything I wanted and was also one of the most affordable upfront cost systems out there.

The monthly program I got was the “Interactive” plan for $42.95 per month. There is a cheaper plan with a more basic service, and a more expensive plan which includes cameras and the ability to turn on and off your lights and other devices. I was not overly impressed with their camera system and instead had a different camera system installed that operates separately, but also viewable from my iPhone, and as I have mentioned I will review in the next few days in a separate post.

Overall, after having the system for a few weeks now, I love it. I have not had any issues with it whatsoever and it works exactly as planned. I love knowing when someone opens my door and knowing that I have someone monitoring my home with me and that the police will be at my home many times within minutes from a call as the SVPD is known for fast response systems.

I really have yet to come across something I do not like, but you usually get 30 days to use the system and if you do not like it, you can return it for a full refund so really, you have nothing to lose.

The modern features of their “crash and smash” system as well as their sensors that so far have worked flawlessly with my system make it hard to think I could find a better system without hiring a police officer to sit inside my home and monitor it. If someone breaks a window to get in, if someone opens my garage door or if someone trips my system for any reason and it is not deactivated by me, the police are on their way.

One thing I must let you know is that you must register your system and get a permit for it right away as you can get cited if your alarm calls the police and they show up without you registering your system and paying the fee to do so. The cost for the permit is $26 per year.

Remember, Nothing is Burglar-Proof

In closing, it is important to note that there are no systems out there that are burglar-proof. One way or another, if someone wants something you have bad enough, they will find a way to get it. Alarm systems have been proven to be one of the best home burglary deterrents, but you also have to do as many other things that you can do to keep burglars out. Don’t get in the habit of leaving valuables in plain view, forgetting to lock your home and car doors and the biggest mistake that many alarm system owners do and that is forgetting to set their alarm whenever possible whether they are in or out of the home.

Thank you for taking the time to read this review, if there is anything I missed or if you have any questions, feel free to contact me.