METRO Partners with VTA to Update Buses on Well-Traveled Routes, including Highway 17 Express

METRO Partners with VTA to Update Buses on Well-Traveled Routes, including Highway 17 Express 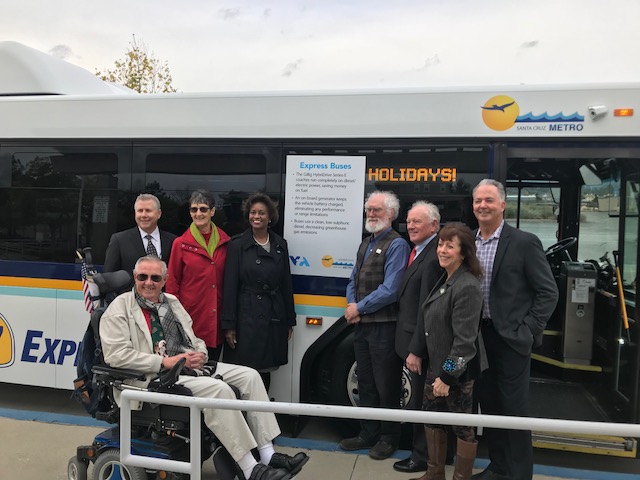 Ten of the vehicles are buses to be used on the Highway 17 Express route, which links Santa Cruz County to transit connections in the Silicon Valley.

“Replacing older buses is essential to maintaining reliable service,” METRO CEO AlexClifford said. “The Highway 17 Express is one of our most popular routes, with hundreds of riders depending on it for their daily commute.”

VTA acquired these Express buses about four years ago through Prop 1B transportation funding. Changes to VTA service, including the addition of a new BART station, reduced VTA’s need for the vehicles.

“The buses are in great shape and still relatively new,” VTA General Manager Nuria Fernandez said. “We looked for somewhere to put them to good use, and here they are.”

METRO also will receive four articulated buses from VTA, to be used on five routes that serve UC-Santa Cruz and the Coastal Science Campus. Buoyed by the success of the Articulated Buses Pilot Project implemented during Winter and Spring quarters to improve METRO service for UCSC students, METRO is investing in its own articulated buses. The buses cost $1 each.

The pilot project, funded by UC Santa Cruz and the City of Santa Cruz, met increasing student demand for bus service, reduced bus overcrowding and limited “pass-bys” — instances when buses that are full decline to stop at bus stops because there is no space for additional passengers. The three vehicles used during the pilot project were leased at a cost of$15,000 a month, which UCSC covered.

“Many students count on METRO to get them to and from campus,” Clifford said.“Finding affordable ways to provide quality service to UCSC is a priority forMETRO.”

The new buses will phase into service beginning this month.

Established in 1968, Santa Cruz METRO provides fixed-route and Highway 17 commuter service to SantaCruz County, transporting about 5 million passenger trips a year. METRO also provides paratransit service in Santa Cruz County with its ParaCruz service, providing about 72,000 trips per year. METRO’s operating budget in FY19 is $52million. Today it operates a fleet of 98buses on 26b fixed routes and serves the cities of Santa Cruz, Capitola, Watsonville, and Scotts Valley, as well as the unincorporated areas of Aptos, Soquel, Live Oak, Bonny Doon, Davenport and the San Lorenzo Valley in the SantaCruz Mountains. For more, visit www.scmtd.com.