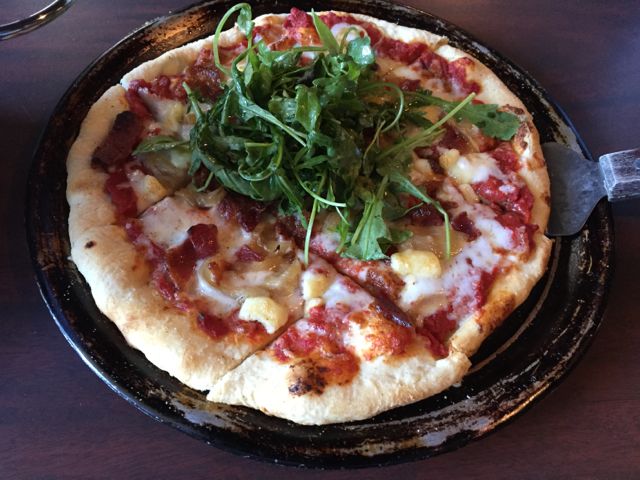 After numerous pizza places have came and went in the Victors Square Shopping Center, some lasting just months, the stigma for another pizza place in the same spot has not exactly been positive. But don’t tell that to owner of the new place, Hop Head, the young and excited Jay Patel who actually does have a vision for what he wants to bring to our town via his place and he has no problem sharing it with you.

I had actually met with Jay some time ago if you will recall and talked to him about what he was doing and a lot of My Scotts Valley people chimed in on what they would like to see at this new one that would be opening up.

As of today, October 29th, they are not actually “officially” open, although they are already serving customers, but from speaking to Jay the official opening is right around the corner.

So here are my thoughts on my first visit as a customer.

The place has a cool vibe to it, something you do not usually see in other local restaurants but rather something you would see in Santa Cruz or San Francisco. Just an overall cool vibe with darker walls and a menu on one wall that is up with chalk because they intend to switch things around and offer various pizzas and side dishes depending on the season and what they want to introduce.

I had the “Babe the Pie” pizza with my buddy, Dan Bowman, and ordered as side dishes the IPA Battered Avocados (more on this coming up) and the TNT Wings along with a root beer. Dan and I split it all and it was more than plenty as we could not fit anything more into our mouths. 🙂

Let’s start with the pizza which had bacon and caramelized onions and arugula brie. It was no doubt very good and something different then what I am accustomed to eating as a pizza. It was not a huge pizza, for $13 you get a 10 inch pizza which with a side appetizer or salad you can split with another adult.

It was not super juicy, nor was it dry either, just in between. But the different taste of it all coming together was definitely a thumb’s up.

My only complaint was wishing it was just a little crispier, with a little more sauce, and that they sliced it in normal pizza slices instead of into numerous squares. Its probably just a mental thing for me, I want my pizza in pizza slices and not as finger foods. I think these wishes could be fulfilled by just asking as it is not a big deal and pretty minor. Other than that, you can tell the quality of the ingredients is very good. That’s always a plus! 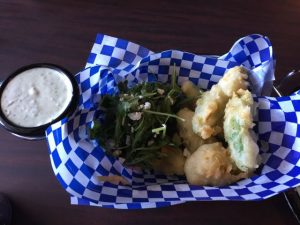 Next was the IPA Battered Avocados. I first said “fried what?” Why not leave avocados as they are? I am a huge avocado fan and can eat them with just a little bit of salt all day.

But these were something special, they really were. They are addicting! I thought I could maybe try one piece, but I could have easily eaten the whole plate. They have a taste that would go down crazy good with one of their beers.

You really have to try this appetizer. What really tops them off is a dipping sauce with a little bit of a kick to it that just completes it. Like Tom Cruise once said, I think the fried avocados look at the sauce and say, “You… complete me”. 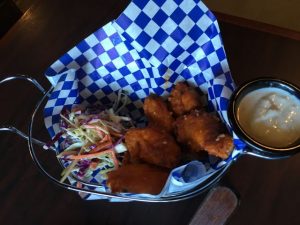 Last, but not least was the TNT Wings. With a name like TNT, I thought they would be hot and spicy. But they were not that spicy, although they were incredibly tasty and juicy. Unlike some places that fry them so much that you have a hard time tasting them, this place does it right and they really do taste good and leave your fingers full of good stuff. Dan and I both commented how these were the best, if not one of the best buffalo wings we ever had. Definitely a winner.

The pricing was not cheap as the total cost for a pizza, two appetizers and 3 sodas (needed an extra one) was around $50. But then again, we did order a little more than we should have. I think that two people can eat there and each walk away paying an average of about $15 for some quality food. This is not fast food quality, this is good stuff from what I can tell and taste.

Yes, they DO have garlic fries called “Duck Fat Fries”, for those who have been asking! They are made with duck fat which I am told gives them a great taste and texture.I did not try them, but I plan on it next time.

I have only a few minor suggestions as follows:

Signage – They NEED signage so people know where they are. Although many will now know once they read this review. Jay said it was on his list of things to do, but if you ask me, he needs to put it at the TOP of the to-do list because you HAVE TO have signage. Like the saying goes, “A business with no sign is a sign of no business”, and they need people to see them and stop in. The rest is up to them!

Ice, Ice Baby – They have no ice for sodas because they do not have the space. The sodas are cold, as are the glasses, but you know they do not stay cold very long and ice is a “must have”. Most people will go in for their beers which you do not need ice, but not everyone will go in and drink beer.

Bigger Napkins – The food really is finger-licking good, but you need to have larger napkins than the ones normally used in restaurants as I found myself going through about 10 napkins during my meal. Bigger is definitely better in this case.

In closing, I look forward to going back and trying some of their beers, later in the evening when I am not working. They look to have a variety rotating in their beer menu just as they plan on doing with their food.

They have lots of TVs where you can watch games and a good size bar.

If this place continues to deliver higher quality pizzas and appetizers like they did today along with a decent variety of beer, I think they can do well. Being in between Jia Tella’s and Los Gallos Taqueria, two places that are popular in town, will help them with foot traffic as people will see them and wonder what they are doing, and even visit the place. However, get a sign up ASAP, I cannot stress that any more.

Check it out and tell us all what you think!