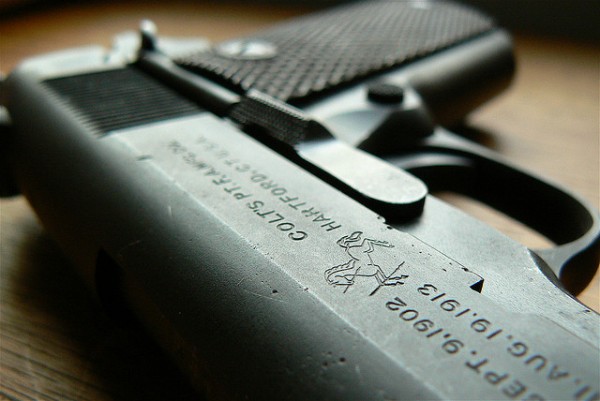 At the upcoming Scotts Valley City Council meeting this Wednesday, September 2nd, Police Chief John Weiss will reintroduce a “revamped” and more thought out city ordinance in an effort to make local gun shops safer. At the previous city council meeting the city council rejected the original proposed ordinance and suggested that it be “fine tuned” before reconsidering it.

The main points of the ordinance being introduced this Wednesday are as follows:

ALARM & SECURITY CAMERAS
Require gun shops to have an alarm and security camera system in place at the gun shop business. With the possibility of a burglary that would be targeting guns, this could aid in the capture of burglars and even serve as a deterrent to any potential burglaries.

As it stands, if a gun dealer would want to open a gun sales business, it is possible that they would make a request to have the business in their home which could deem the business unsafe with the new ordinance with guns being handled and sold in a residential area, which may not be an ideal location.

EFFECTS OF THE ORDINANCE

How this affects gun shops: The plan and reasoning for the above ordinance is not to turn away gun shops from opening their business in Scotts Valley, because as other cities have done, they could legally do so. The plan is to make gun shops safer.

How this affects residents: “There was no regulation in regards to gun shops in Scotts Valley”, said Weiss. “We needed reasonable regulations.”

According to Chief Weiss, the Scotts Valley Police Department has been inside the local gun shops and have had no problems with the business, they have all been upstanding people and business owners. The goal is to make sure that gun shops are safe and are in accordance and conducive to the best interests and safety of our city and its people.

THE VERDICT
As a gun owner myself, as a member of the NRA, and as someone who appreciates and recognizes my rights to gun ownership, I have long been a proponent for safer gun laws when it comes to how sales are handled and the importance of doing what we can to make sure gun transfers are done as safe as possible and keeping them away from individuals who have no business having a gun. While I understand a lot how people feel about their second amendment rights, because I too exercise these rights, times have changed and I think that thinking everyone and anyone should be able to have a gun is ludicrous. Not everyone should be allowed to own guns and not all places are suitable for gun sales.

I think that at the end of the day, this is a non-threatening ordinance that is being proposed and we have to many times in life choose and pick our battles. This is not a battle, this is not an unreasonable ordinance and does not affect current gun shop owners or gun owners, and will it only make new gun shop owners here in town practice safer business practices. And in some cases, certain locations would not be deemed appropriate for a gun shop. Nowhere in this ordinance does it say that the police are going to come and take your guns away from you. Unless, of course if you are using or selling them in an unsafe or illegal manner.

I just think that as responsible gun owners and responsible gun shop owners, there are bigger fish to fry, bigger battles to fight. This is not a battle, this is a fair and reasonable compromise.

Click here for more information as posted on the EVENTS Calendar