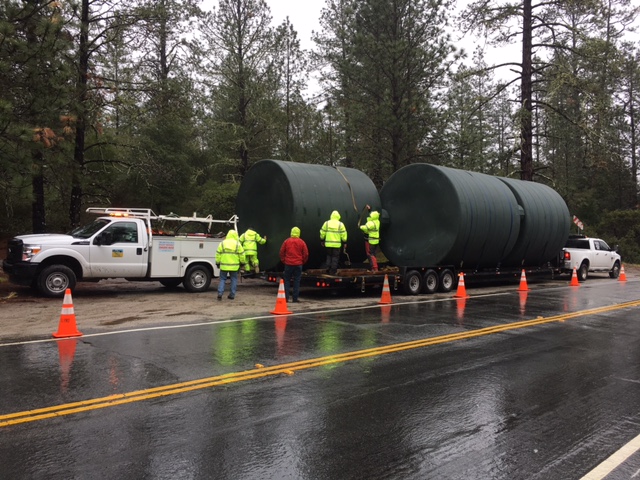 Bids on the ‘Probation Tank’ construction project will be opened at the end of April, with construction expected to start mid-2018

The new tanks will provide water storage while the old Probation Tank is decommissioned and a permanent steel water storage tank is constructed. In addition to replacing the existing 100,000-gallon redwood storage tank with a 527,000-gallon welded-steel storage tank, the completed project will also include an 8-foot-wide maintenance access path around the tank, two retaining walls, drainage improvements and utility upgrades. The District received a required permit for this project from U.S. Fish and Wildlife Service (USFWS) in October 2017.

Three 10,000-gallon temporary poly storage tanks have been delivered and SLVWD crews are connecting them to the water system this month. The next step in the $1.95 million project — soliciting bids for the project to select a contractor — has already begun. Plans and specifications are available on the District’s website (www.slvwd.com). The District will be opening bids at the end of April and awarding a construction contract in May, with construction expected to begin in late-spring or early-summer.

“The start of construction on the replacement tank is right around the corner. It’s important to install the temporary tanks before construction begins so we have an opportunity to get comfortable operating the temporary tanks,” District Manager Brian Lee said. “This is a major step forward in the long process to replace this leaking tank.”

The Probation Tank replacement is a key capital improvement project among many others completed or in process that, combined, total $16.85 million since 2014 in infrastructure upgrades to the District’s 76-year-old water system. Learn more about the District’s progress on infrastructure upgrades here: http://slvwd.com/admin/Capital%20Improvement%20Projects%20Progress%205.24.17.pdf