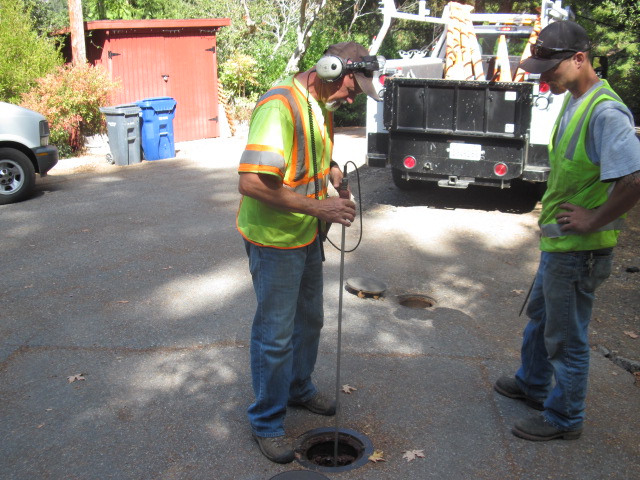 Through its Leak Detection Program, the San Lorenzo Valley Water  District has repaired dozens of leaks on its underground water mains, estimated to save millions of gallons of water annually.

SLVWD contracted with Utility Services Associates, a Seattle-based company, to perform the leak detection from September 2014 to August 2015, at a cost of $40,000 to the District. Through the use of state-of-the-art acoustical listening devices and digital correlation technology, the entire 151 miles of underground water mains in the District were checked for leaks. A total of 59 leaks were detected and, of those, 56 were repaired. The unrepaired leaks are associated water tanks, repairs to which are part of the District’s future capital improvement projects.

The leaks discovered were causing an estimated loss of 110.7 gallons per minute district-wide. Repairing the leaks will prevent an estimated 58,183,920 gallons of water loss annually. For the 2015/16-budget year the District is projected to produce 680 million gallons total.

“When it comes to saving water and stopping leaks, it’s important that we hold the district to the same standard as we ask of our customers,” said Brian Lee, SLVWD District Manager. “The Leak Detection Program proved to be a great investment for the District and shows that checking for leaks is a valuable water conservation tool. We continue to encourage all of our customers to check their pipes and fixtures for leaks to help with the ongoing conservation effort.”

Although the District views the leak detection program as a huge success, aging infrastructure continues to create more leaks. Mainline replacement is needed in many areas of the District. The District is currently creating a comprehensive 10-year Capital Improvement Program that will greatly assist in replacing leaky pipelines that have reached the end of their usefulness.

A complete report on the Leak Detection Program will be presented during the Board of Directors meeting, 7 p.m. Thursday, Sept. 17 in the San Lorenzo Valley Water District Board Room, 13057 Hwy. 9, Boulder Creek. For more information call 831-338-2153.