On 10-03-2016 at approximately 2348 hours, Officer conducted a records check of a vehicle traveling on Mt Hermon Rd. Vehicle was found to be reported as stolen out of Santa Cruz. Prior to the Officer initiating a vehicle stop, the vehicle made an abrupt turn into the Kings Village Shopping Center and came to a stop. As the Officer approached, the male driver and female passenger exited the vehicle and began to walk away. The driver attempted to flee on foot and was apprehended a short distance away. Female passenger was also apprehended near the scene. A subsequent search of the vehicle revealed narcotics, drug paraphernalia and suspected stolen property. 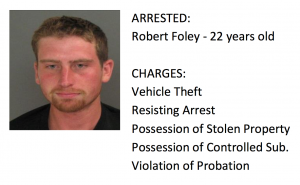