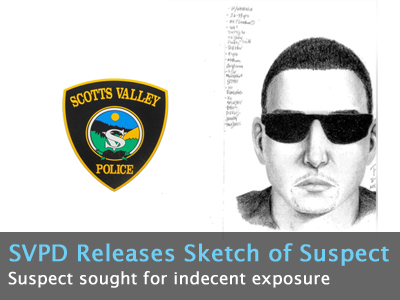 **This is an update to the previous reported indecent exposure incident that occurred on 8/28/14 in Scotts Valley. The suspect vehicle involved was described as a smaller 2-door Toyota truck, dark green in color, with silver rims.

Anyone with information regarding this incident is encouraged to call the Scotts Valley Police Department at (831) 440-5670.

About 5:50 p.m., (Thursday, August 28th) a girl in her late teens was walking near Scotts Valley Drive and Bean Creek Road, said Scotts Valley police Sgt. Justin Milroy. A man in a green Toyota pickup made “kissing sounds” at the girl to get her attention, Milroy said.

The girl looked at the man, then the man raised up from his seat and exposed himself, police said. He then drove north on Scotts Valley Drive.