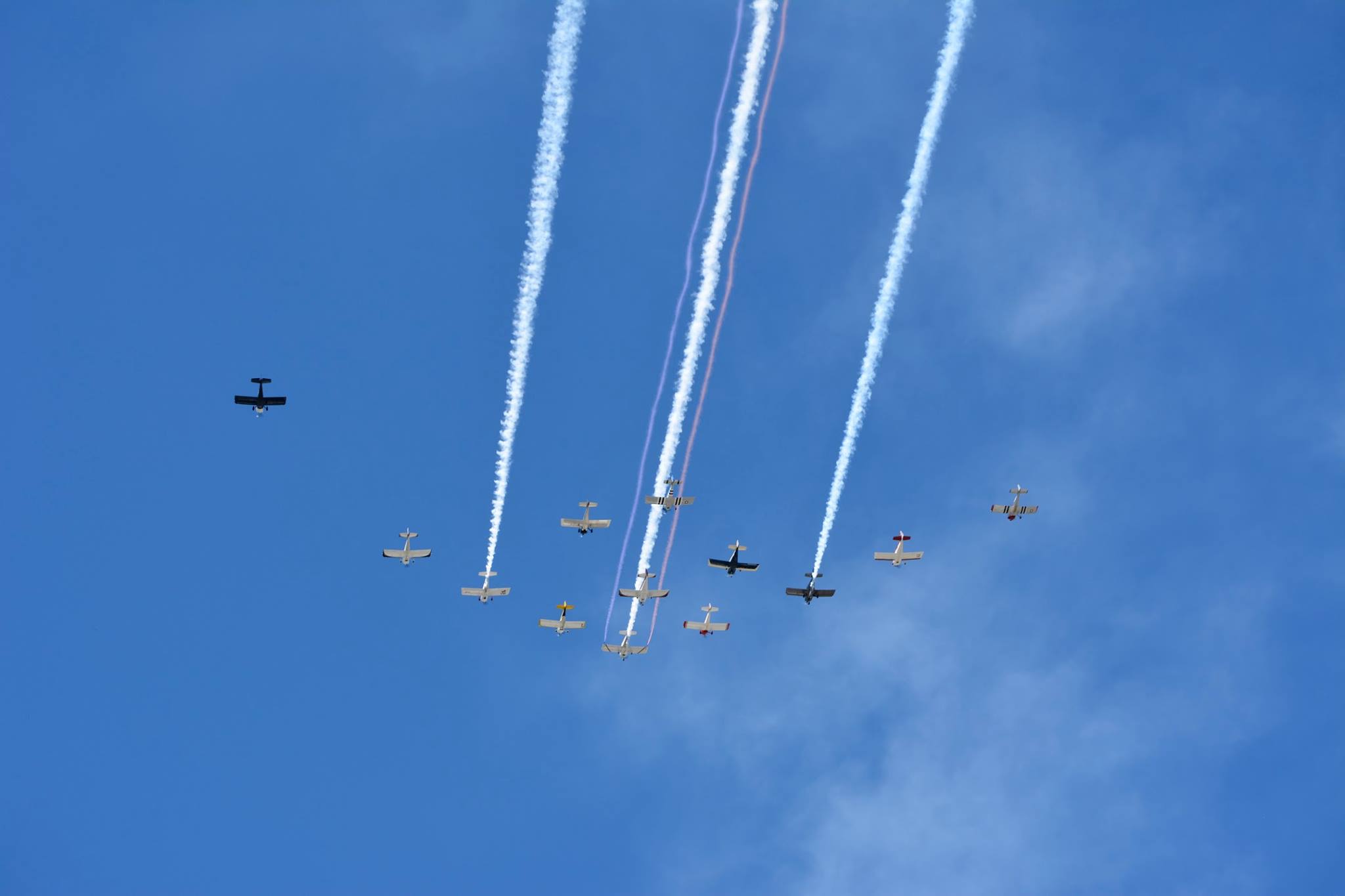 If you missed this year’s 4th of July Festivities that were held in Scotts Valley, according to most who attended, you missed a “Very Good” time that was had by thousands of attendants.

In an informal survey that was taken by My Scotts Valley, a total of 171 locals responded to the 7 question Q&A regarding the festivities which are a staple in the Scotts Valley community and have been so for so many years. A lot of work is put into the events of that day along with a lot of planning and help from so many people in and around the area.

As stated, this is an “informal” survey meant to get feedback on the experiences of attendants. Not that there was anything wrong with the festivities, because as the survey results state, they indeed were very good.

So let’s get started! 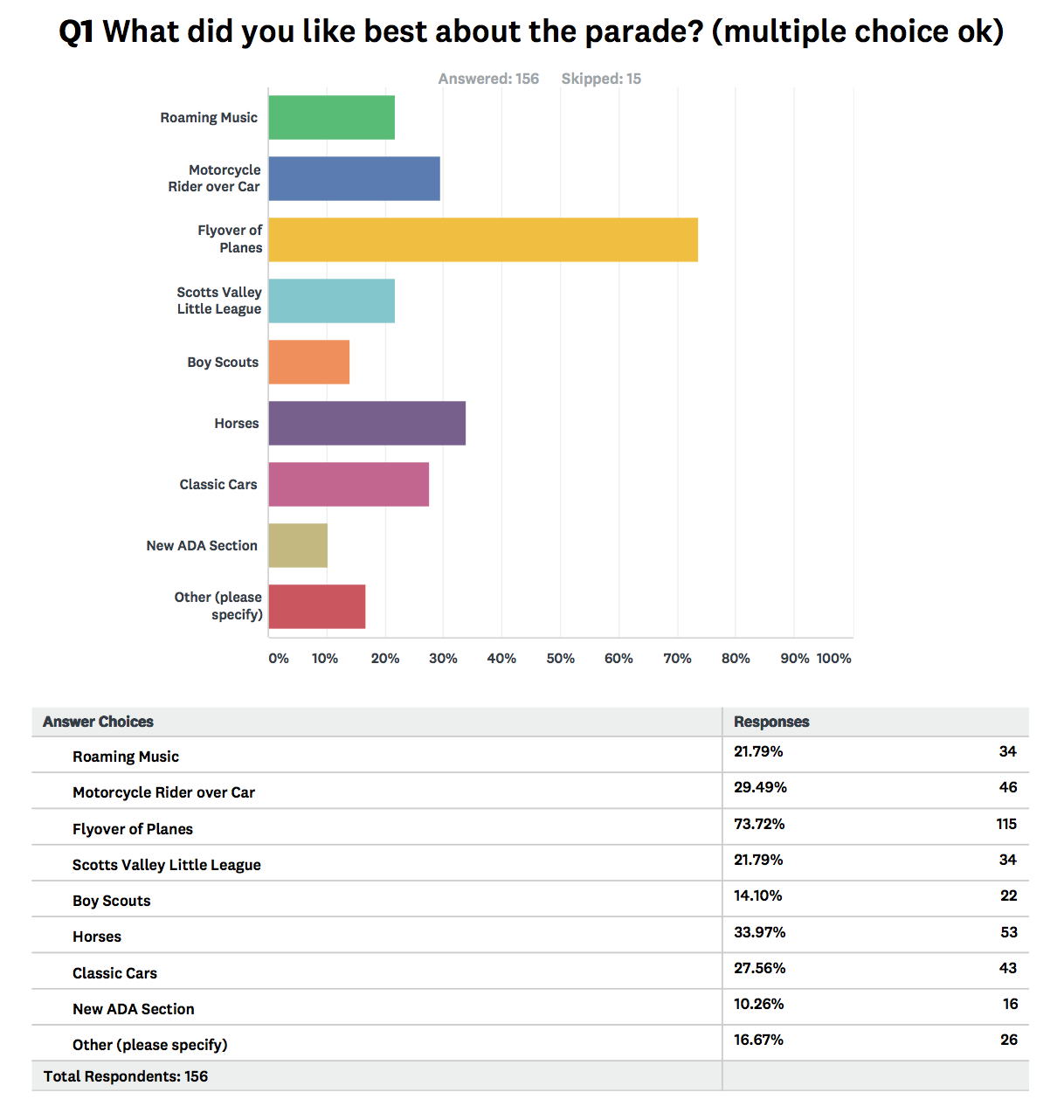 The flyovers were a huge hit as 73.72% voted for them as their favorite part of the parade. And how awesome they were with numerous flyovers that really gave you the chills every time you heard and even felt them.

The horses came in second with 33.97% of the votes as they were followed closely by a few youngsters who had the wonderful experience of “picking up” after them with a shovel. Those kids belonged to no other than City Manager Jenny Haruyama, who volunteered her kids for the memorable task at hand. And the best part? They did not complain about it and did it with a smile. Now that is some good kids who smile while picking up poop! 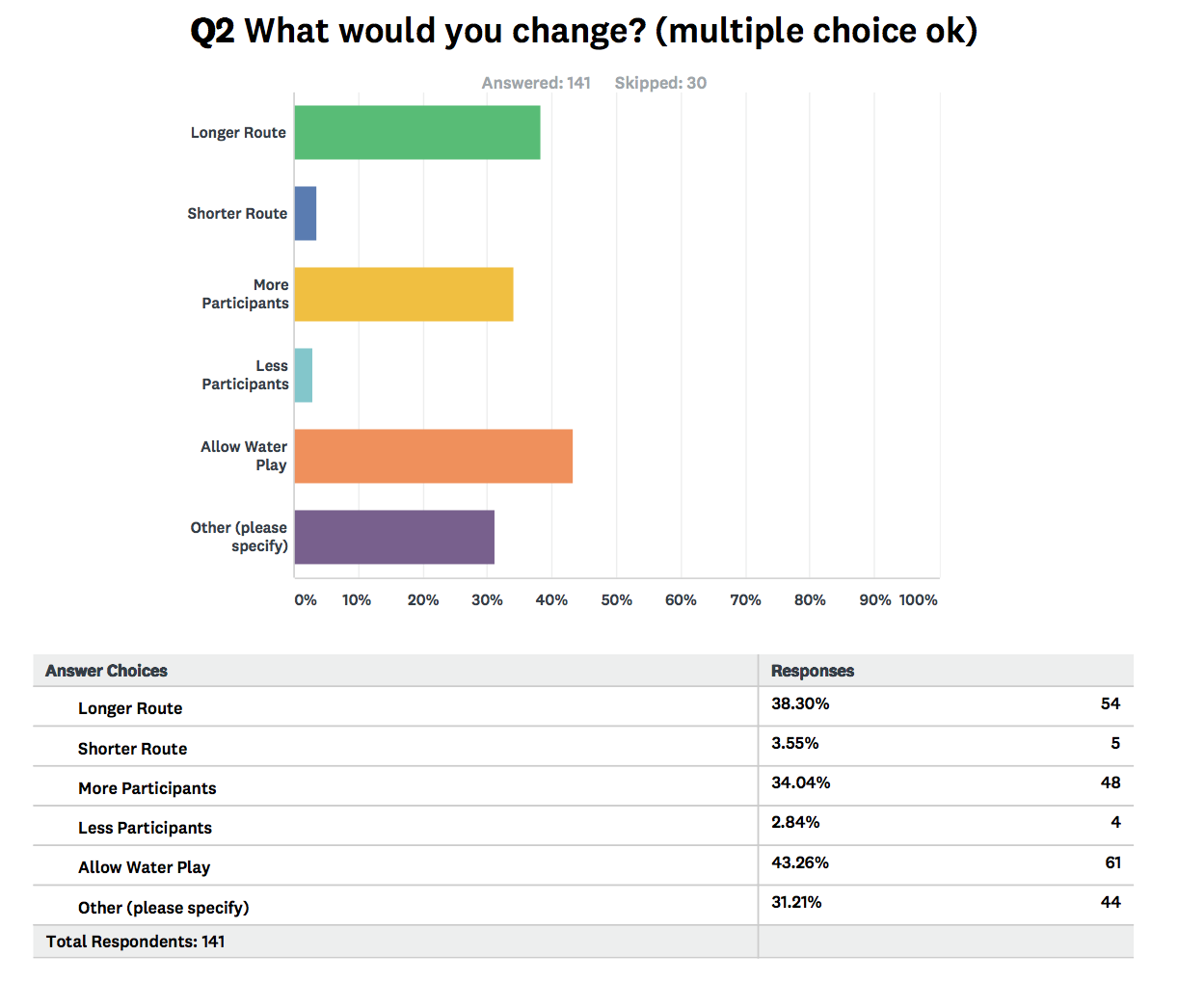 When asked what people would change, 43.26% said that they would allow water play such as squirt guns, spraying, maybe water balloons and all the fun that comes with getting wet during a hot day.

Another hot button was the changing of the route as it was shortened up and had several areas with numerous rows of people trying to get a view and in one section where the ADA tents were, some seniors had a hard time watching as people were standing in front. But that appears to be an easy fix with making the parade route longer to fit people more comfortably.

Numerous comments were made also regarding the throwing of candy by some in the parade as a few people got hit with candy. Without a doubt, at least from what I saw, the people and kids were not trying to hurt anyone with the throwing of candy but were more than likely trying to reach kids several rows deep and that were at a distance. A solution shared by many was perhaps the “tossing” rather then throwing of candy. The general consensus was not to remove that part, but rather alter it to make sure nobody gets hurt. 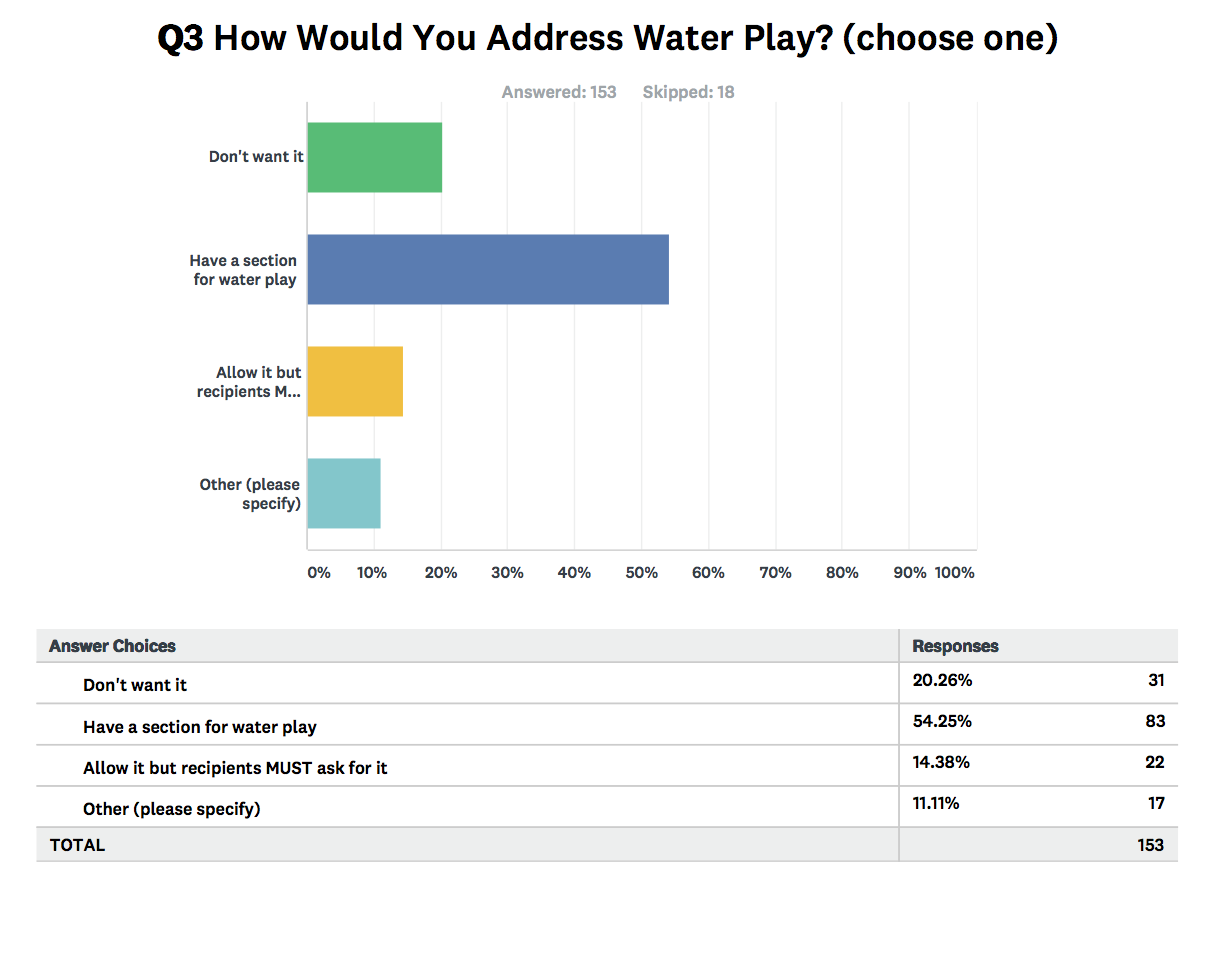 In regards to the water play, 54.25% of the respondents suggested that there be a section for water play such as an area where parade participants were ok to squirt or wet attendants and not the other areas. It could be a great solution that would make most happy, and maybe a topic of discussion for the organizers of the parade. People want it, and those who do want it maybe should get it, and those who don’t should be respected and having a section may appease most if not all.

A little history about why the water play was stopped…

For years water play started off with just fun squirt guns and nothing serious, then it escalated to super soakers, water balloons and even someone with a hose spraying inside cars which led to many withdrawing from the parade.

There were complaints about classic cars being damaged by water play – electronics, leather upholstery, etc. Even the Classic Police Car had water sprayed inside that could have destroyed the electronic equipment & radio, according to organizers. SO after a while and more incidents, participants dropped dramatically due to the problems with water play. There were complaints from parade participants who’s cameras were damaged and kids hit with water balloons.

It was only when organizers promised to curtail the water play that many of the participants started to return, and hence the rules in recent years of no water play in the parade.

So can everyone just get along? I think so. I think that a solution that works for everyone should be discussed and implemented and as long as everyone respects each other, I don’t see why a happy medium cannot be found. 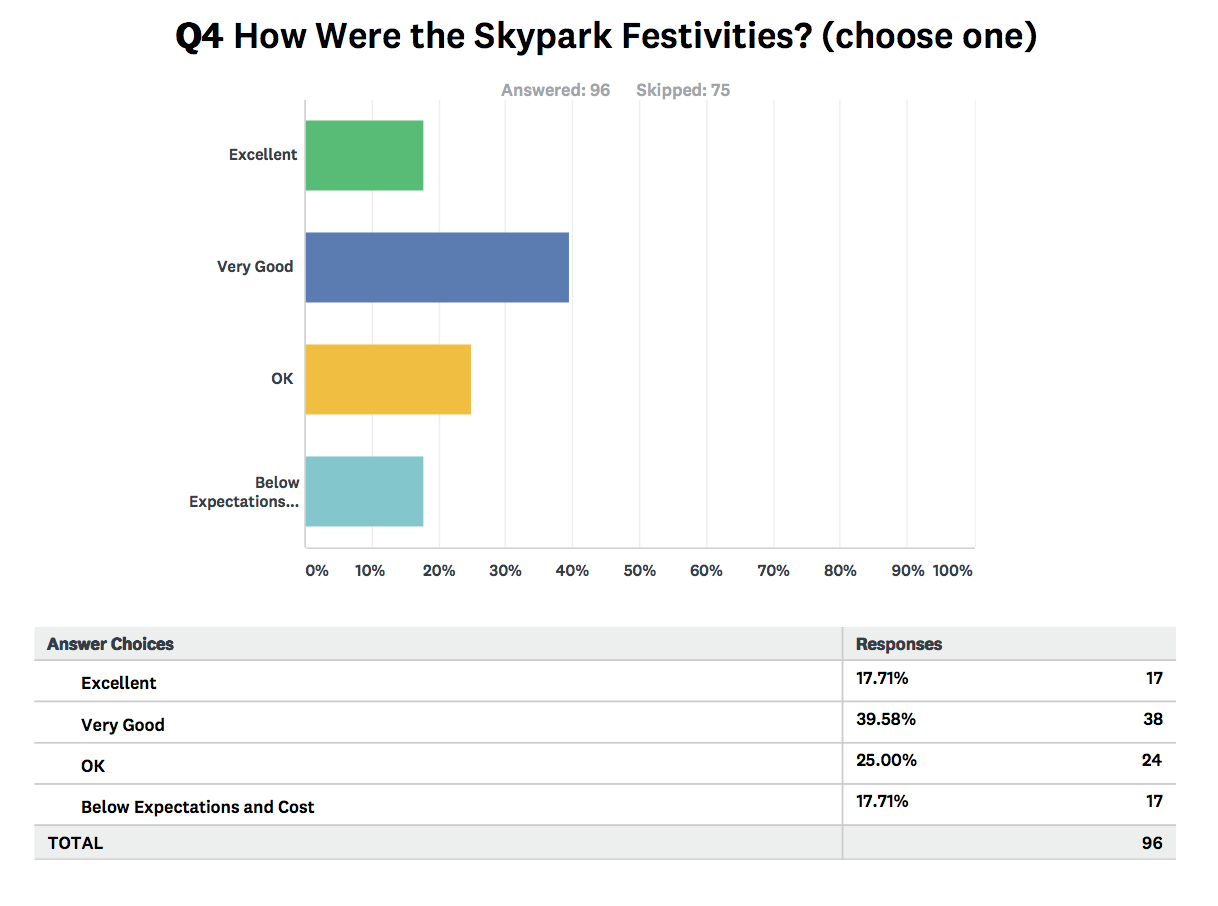 The Skypark festivities were rated as “Very Good” to “Excellent” by 57.29% of attendees. The highest vote was “Very Good” by 39.58% of respondents. 25% said they were “OK”, with many respondents commenting on the fireworks show that many felt were either too long, or not in sync with the music and did not flow very well.

But overall, a very good to excellent experience by most which is not an easy task to have so many really enjoying themselves when you are dealing with literally thousands of attendants. 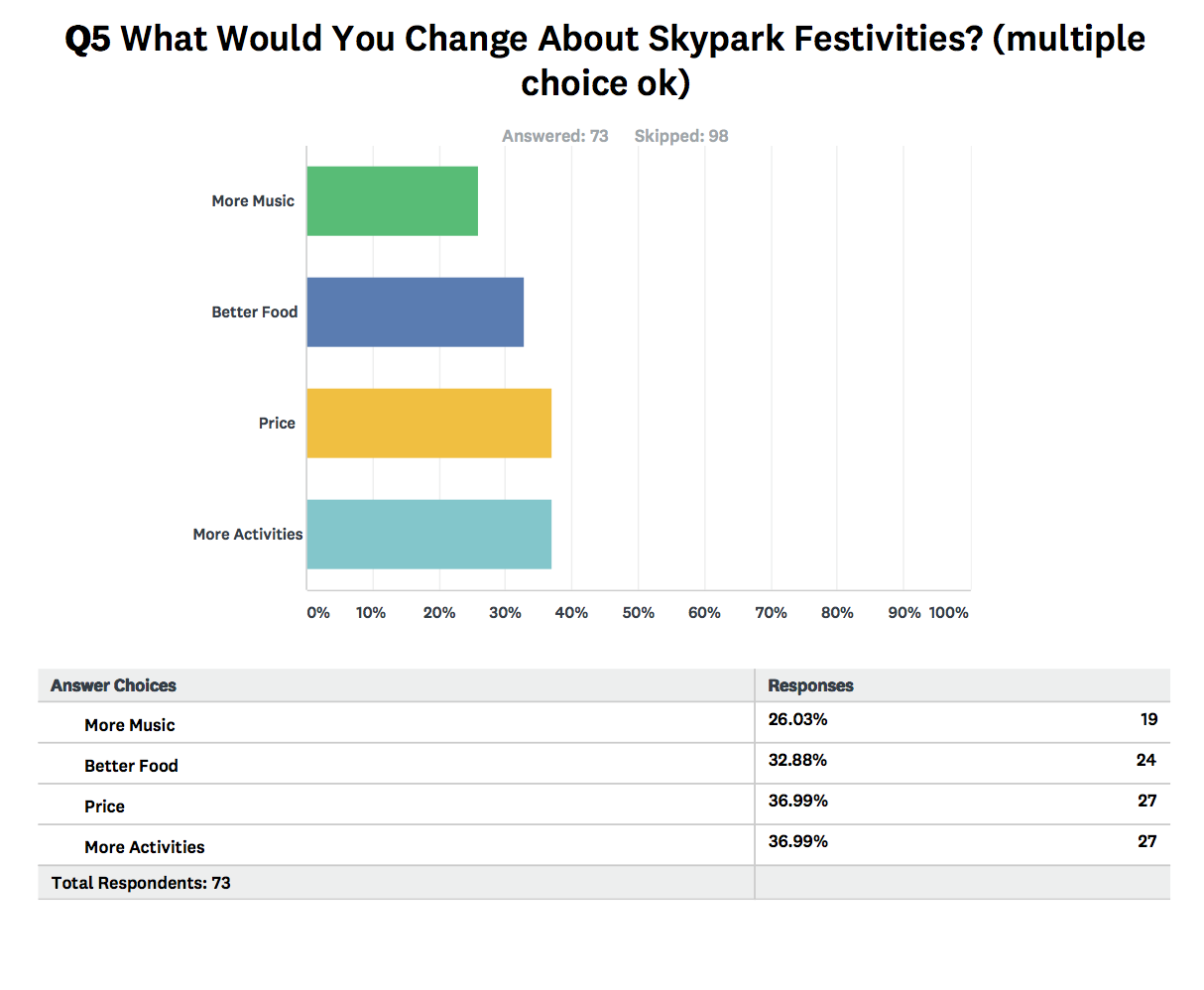 The two top vote getters when asked what they would change about the Skypark Festivities were “Price” and “More Festivities.” Other than those two suggestions, and with “Better Food” coming in a close 3rd, there were not too many individual comments that specifically addressed the need for better prices and activities with the exception of a few recommending a better structure for kid’s activities and games. 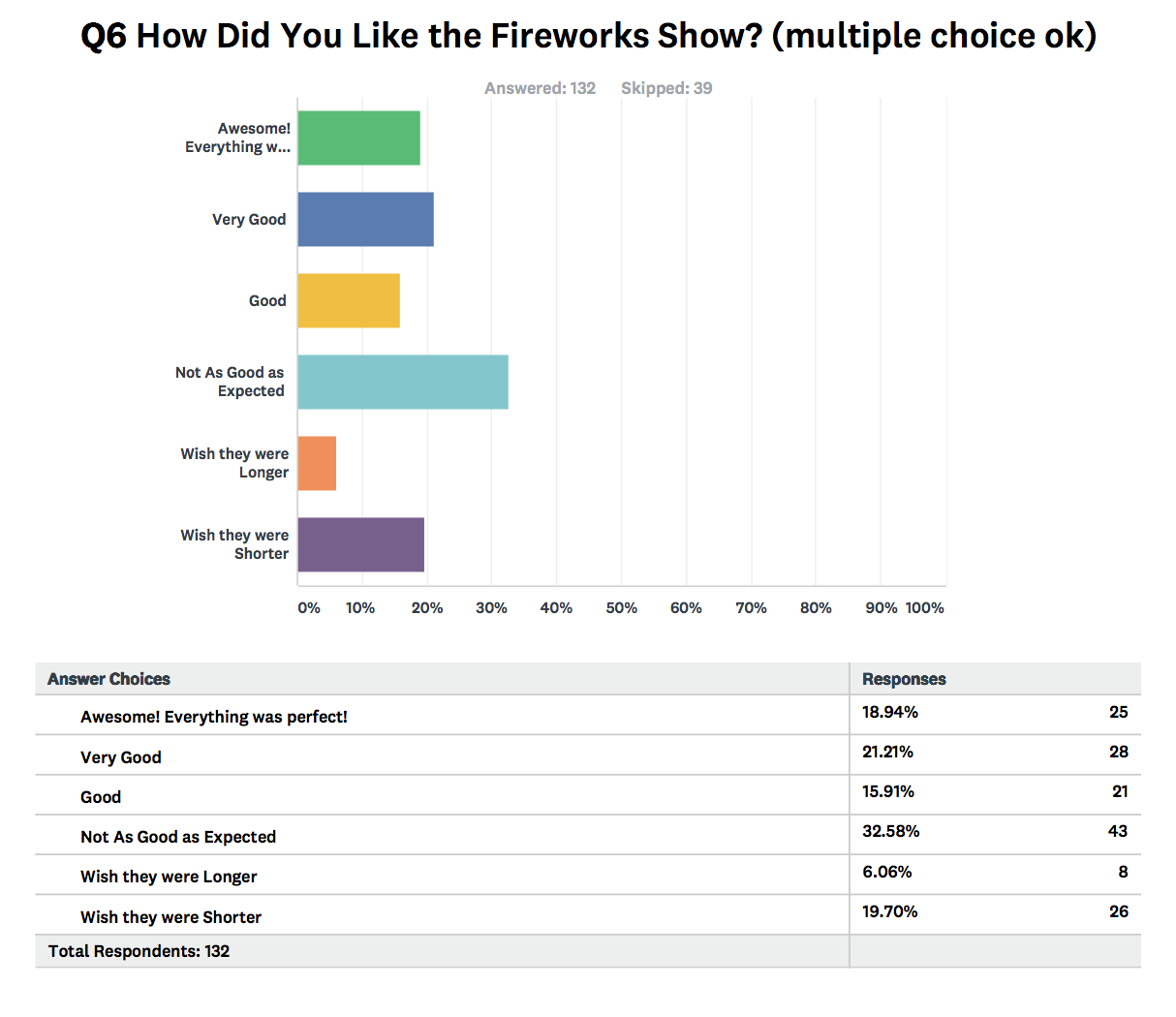 I have always enjoyed the fireworks show but with 2 kids in the 7 and 8 year old bracket that are in bed by around 8:30-9pm, its tough to make it out there for us during this time.

But somehow, this year seemed to have a lot of comments about the length and flow of the fireworks (as stated above in a previous comment) with many comments stating that they lasted too long and were just not in sync with the music. With so many comments appearing similar, perhaps it is something that should be discussed with the organizers and the company that provides the fireworks. You don’t always have to make a change in the providers of the service, sometimes you just need to make some adjustments. And then again, sometimes a change is needed.

That is a comment and discussion to be had because clearly 32.58% stated that they were not as good as expected and a whopping 19.70% said that they were too long. I say “whopping” because most people think fireworks are too short, but if almost 20% say they are too long, perhaps they are. 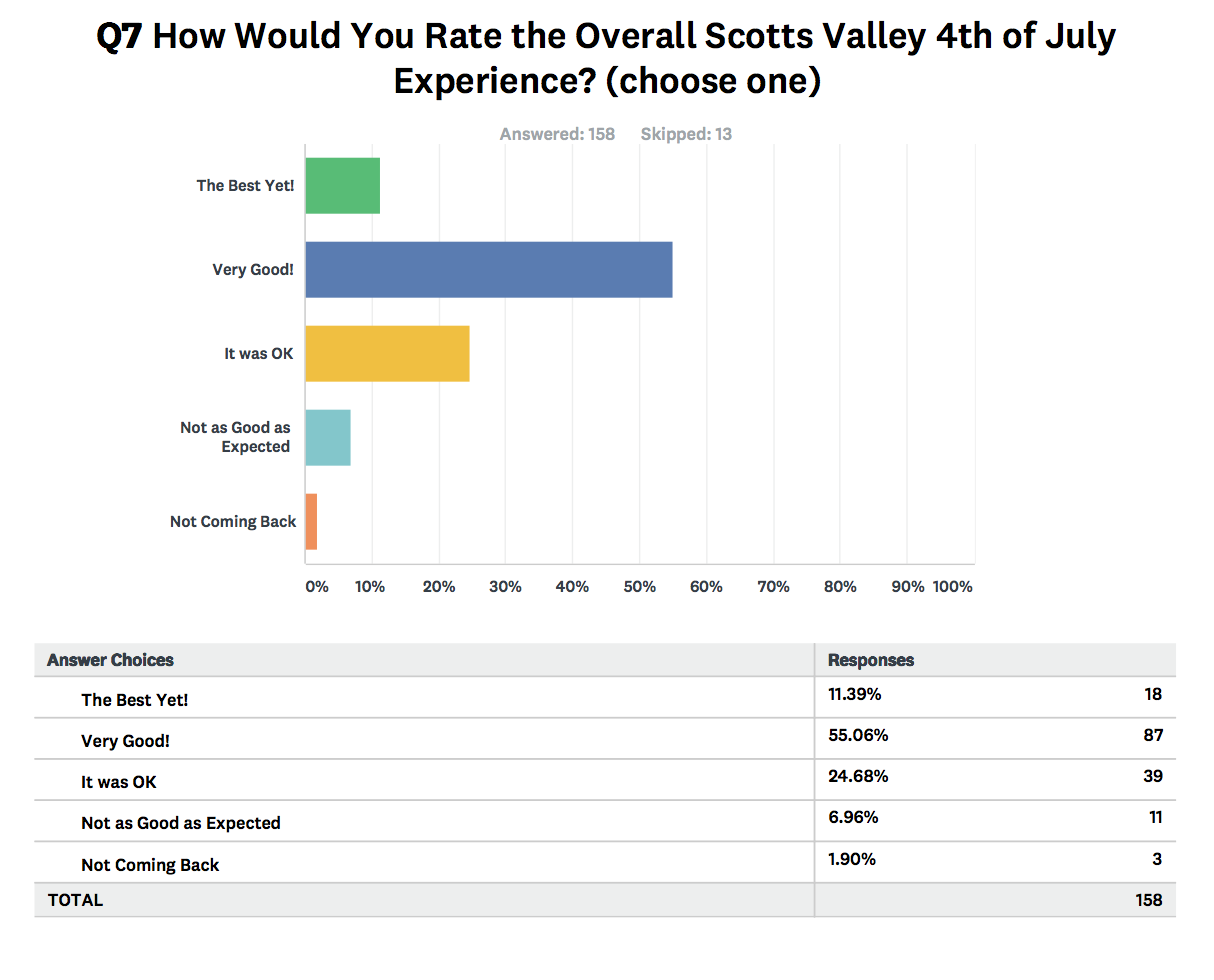 Overall, this year’s 4th of July Festivities in our beautiful little city were a hit. It is tough to please everyone, believe me, I know. But when you get 66.45% of attendants saying that the festivities were either “Very Good” or “The Best Yet”, you are doing something right. That is basically 2 out of 3 attendants who enjoyed themselves.

There were some minor complaints regarding the traffic flow and congestion, and at the same time, there were also numerous comments praising the Scotts Valley Police Department for how they handled the traffic situation. I think that its fair to say that there is no perfect solution and the SVPD as well as organizers are doing the best they can to control that situation in light of thousands of people converging into and out of an area in a short amount of time. Hey, if anyone has the perfect solution, I would love to hear it! 🙂

So, Why Have These Festivities?

Many people do not realize the importance and significance of why our city has the festivities every year with some questioning if they should be had at all with recent stories coming out about a money issue within the city. But what most people do not know is that the City of Scotts Valley does not pay for the 4th of July Festivities at Skypark. They are paid for by a non-profit organization called the Scotts Valley Advocates that raise funds via tickets sales to the Skypark events including the fireworks, along with local sponsorships from local people and businesses. It truly takes a village

Also… Did you know that much of the money that is raised by these events and by the Advocates goes back into our community? It does. It goes to pay for and has paid for and supported things like:

If you want more information on how and why these yearly festivities work and are needed, click here on an article I wrote a couple of years ago that goes more in-depth on the matter.

In recapping the festivities and responses from those who took the time to answer the 7 question survey, the general consensus is one of pride among the people of Scotts Valley as many comments that came in were those by residents and locals expressing their love and appreciation for the parade, the fireworks and everything that the 4th of July brings to our wonderful city.

Overall a Big Thumb’s Up

Overall a wonderful job by the organizers and volunteers of all the events including the Scotts Valley Police Department and people from the city who jumped in to help out on their time. And of course, a great HUGE THANKS to the Scotts Valley Advocates for putting on such a wonderful day of fun and commUNITY and of course, a HUGE THANK YOU to all the sponsors who graciously donated to the success of this special day.

Thank you Lord for this very special place and for all the wonderful people who make this a truly special commUNITY.